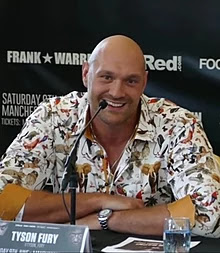 Undefeated British heavyweight Tyson Fury shook off a left hook to the temple that left him bloodied and bruised before battling to a unanimous points win over Sweden’s Otto Wallin Saturday.

Fury had to dig deep after the bone-rattling third-round punch from heavy underdog Wallin sliced open a deep gash over his right eye in Las Vegas.

The shot left Fury half-blind for the remainder of the 12-round non-title bout as blood flowed freely down the right side of his face.

But the self-styled “Gypsy King” powered back in a battle of attrition and eventually seized control in the ninth round.

“I got caught early on which changed the fight completely,” Fury said. “For the majority of the fight, I couldn’t see.”

Because the cut was from a punch and not an accidental clash of heads, Wallin would have won by TKO had the injury caused officials to stop the contest.

Fury was hoping for a dominant performance against the unheralded Swede to stoke excitement for his lucrative money-spinning rematch with WBC champion Deontay Wilder which he claims is scheduled for February.

Fury climbed off the canvas after a 12th round knockdown by Wilder in December only for judges to score a draw in a pulsating title fight that many observers thought the Englishman had won.

He called out Wilder after the verdict over Wallin was announced saying, “Deontay I want you next, bum.”

Before Saturday’s fight, the 31-year-old Fury insisted he wasn’t looking past the 30/1 underdog Wallin, who entered the ring with a perfect 20-0 record.

An over-the-top, five-minute ring walk sporting a sombrero and accompanied by a Mariachi band had some wondering if Fury was more concerned with boosting his Mexican fan base on their independence day than beating Wallin.

But as he had against Wilder in December, the unbeaten 6ft 9in Fury (29-0-1, 20 KOs) showed he can deal with adversity in the ring.

“It is all heart and determination,” he said. “If I can keep going then I will keep going.”

The 28-year-old southpaw Wallin angered Fury at the end of the sixth round by reaching over the referee with his glove to try and rip open the cut even more.

The fight had been briefly halted in the middle of that round so the ring doctor could inspect Fury’s cut. “I can see,” Fury insisted when asked if the blood was affecting him.

By the final round, both boxers were out of gas. Wallin connected with a final flurry and for a few fleeting moments, it looked like the heavyweight division might have its second huge upset of a fancied British fighter in three months.

In June, Mexico’s Andy Ruiz knocked out the previously unbeaten Englishman Anthony Joshua in the seventh round in New York to win three of the four major heavyweight belts in one of the sport’s biggest shocks.