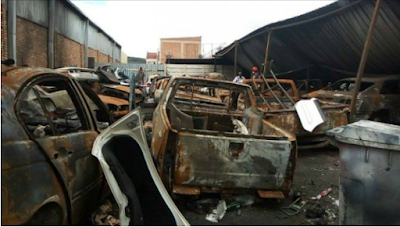 Three people have been reportedly killed and many properties destroyed in an attack on foreigners, including Nigerians based in South Africa.

According to Adetola Olubajo, president of the Nigeria Union South Africa, the attacks began on Sunday morning in Jeppestown area of Johannesburg. He said the angry mob set a building ablaze in the area.

“The mob also looted several shops that were around the vicinity suspected to be owned by foreign nationals. But the Police later dispersed the mob and made some arrests,’’ he said in a statement.

“Late in the evening of Sunday, September 1, a group of violent locals suspected to be Zulu hostel dwellers besieged Jules Street in Malvern, Johannesburg looted and burned shops/businesses.’’


According to witnesses living on Jules street, the Zulu hostel dwellers were very organised and well-coordinated in looting and burning of any shops/businesses suspected to be owned by foreign nationals.

Olubajo said information gathered by members of NUSA in Malvern area indicated that over 50 shops/businesses were destroyed, looted and burnt overnight.

“Also, some businesses owned by foreign nationals were looted in Germiston on Sunday evening. A Nigerian-owned Internet Café and computer accessories business was among the looted shops in Germiston,” he said.

“When I got the sad news late yesterday (Sunday) evening, I immediately informed the Police in Jeppestown but lots of damage had been done already.

“The means of livelihood of people were looted and destroyed by fire overnight which has left many Nigerians traumatised.

“Nigerian-owned businesses were seriously affected. A car sales business owned by a Nigerian were among the several businesses set ablaze over the night.

“Although the Police said that many people had been arrested in connection with the unnecessary attacks, the looting and burning of foreign-owned businesses continued till Monday morning.”

He added that properties and businesses belonging to foreign nationals worth millions of Rands had been lost to looting and burning in the past week at different locations in Pretoria and Johannesburg.

Olubajo said that there was massive protest march in different parts of Johannesburg which were targeted at foreign nationals, noting that some of the areas affected by the violent protest march were Rosettenville, Turfontein, Germison, Primrose and Silverton in Pretoria.

“We implore the security operatives to be proactive and not reactive as many long years hard-earned investments have been lost through looting, destruction and burning,” he said.

“Our government officials should also seriously engage their counterparts in South Africa.

“This proactive move will go a long way to prevent further loss of properties and even lives. The situation is tensed and very dangerous for foreign nationals, hence, we implore Nigerians in South Africa, most especially in Gauteng Province to be vigilant and stay safe.”

Ramaphosa had told his Nigerian counterpart that efforts were in place to stop the attacks on Nigerians.