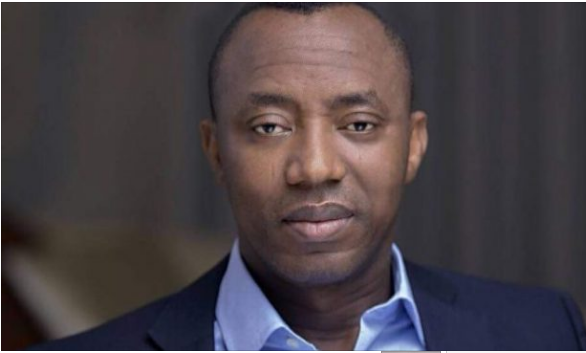 Omoyele Sowore, convener of #RevolutionNow Movement, says he was rough handled by operatives of the Department of State Services at the time of his arrest in August.

The DSS had picked up Sowore in Lagos ahead of the planned nationwide #RevolutionNow protest.

In the transcript of DSS interrogation with Sowore published by Sahara Reporters, a news platform he founded, Sowore told his interrogators that he had been denied access to his loved ones.

When further questioned, he explained how he was arrested and maltreated.


“I was abducted in the middle of the night… I was taken to one of your facilities in Lagos. I was beaten up, rough handled on my way to the facility in the car. And my cousin, who was in the room with me was also beaten and handcuffed, and my properties were forcefully seized,” he said.

“And when I got there, of course, the maltreatment continued, they threw me on a cold floor and locked the door.

“I had no contact with even the guards for two nights, I was in that facility before I was flown here by your agents. So, I was seriously maltreated.”

He also told the DSS that he refused to take food at the DSS facility until he was allowed to speak with a lawyer.

On Friday, the federal government charged Sowore for causing an insult on President Muhammadu Buhari.

He was accused of money laundering and cyberstalking the president.

His continued detention, despite the expiration of 45 days granted DSS, had been followed by an outcry, and lawyers on Saturday called for his immediate release.

Below is the full transcript:

DSS: The time now is 13 minutes to 7:00pm and this is the DSS Headquarters and I’m sure Mr Sowore Stephen Omoyele you’re aware of where you are at the moment, right?

DSS: The Service arrested you because of your planned revolution and we are here to ask you certain questions, to have a conversation with you.

I want to tell you that you are not obliged to say anything except you wish to do so. But whatever it is that you say is being recorded in the presence of your lawyer and at the end of the day, we will also request you to make written statement after our conversation with you, and it could be used in evidence. Are you okay with this?

Sowore: Have you shown my lawyer the detention and arrest warrant or a detention order at this point?

DSS: Okay, he met with our legal department.

DSS: I don’t know if in the course of his meeting with them he asked the same question.

Sowore: I am asking, I’m asking you too.

DSS: I now asked the lawyer, did you ask of the detention order?

DSS: Okay, so may be when we are done.

DSS: He can sort it out with the legal department, but there is a detention order already.

DSS: Okay, if you want after then you can confirm from the legal department, they will get him through the process, so are you okay for us to continue?

DSS: I am Monsur.

DSS: My name is John.

Sowore: You all have last names apparently.

DSS: I am Usman Usman.

DSS:  Like I said, we’ll be asking you questions and our advice is for you to be truthful to the best of your knowledge. We’ll not force you to say anything. Whatever question we ask and you have a problem with or you don’t have an answer to or you don’t want to answer, there is no compulsion, you simply tell us you’re not going to answer these questions.

So, we just want to proceed by asking if in the course of your being here anybody has molested you in any way or maltreated you?

Sowore: My understanding is that the DSS is one from where I was arrested to this point.

Sowore: So, I was abducted in the middle of the night.

Sowore: I was taken to one of your facilities in Lagos.

Sowore: I was beaten up, rough handled on my way to the facility in the car.

Sowore: And my cousin, who was in the room with me was also beaten and handcuffed, and my properties were forcefully seized.

Sowore: And when I got there, of course, the maltreatment continued, they threw me on a cold floor and locked the door.

I had no contact with even the guards for two nights, I was in that facility before I was flown here by your agents.

Sowore: So, I was seriously maltreated.

DSS: Has anybody denied you food?

Sowore: While in your facility in Lagos, yes, but I decided that because of their hostility I won’t take any food until I am allowed to talk to a lawyer.

DSS: Okay, but since you were brought here, has anybody denied you food?

Sowore: I continued to refuse food.

DSS: So, you refused food from Lagos?

Sowore: Since the day I was arrested.

DSS: Okay, you refused food since the day you were arrested and you continued but we have allowed you food from outside right?

DSS: Okay and you have seen your lawyer as requested.

Sowore: I have seen my lawyer.

Sowore: But I am still being denied access to my immediate family.

DSS: And you’ve made calls to your family members?

Sowore: I’ve not made any calls to them. My brother is outside; he wasn’t allowed to see me as we speak.

DSS: Okay, I will sort that out but I understand you made a call the other day?

Sowore: No, I’ve not made any call to my family members, I only made calls to people I remember their numbers to bring’ me food and asked them to call my brother. My brother came in today.

Sowore: But he was denied access to me, so I haven’t been able to see him and as a result speak with my mum; wife and kids.

DSS: So, I will get back to your brother and know what it is. But I am not aware you’ve been denied such privileges, of course for the one you’ve talked about talking to your lawyer, immediately you know I handled the matter. Now you have your lawyer present with us, so let’s go for the records, tell us about yourself.

Sowore: My name is Omoyele Sowore.

Sowore: What else do you want to know?

DSS: Your date of birth.

Sowore: I was born in Ese-Odo Local Government Area of Ondo State.

DSS: Okay, the name of your parents.

Sowore: David Sowore and my mum is Esther Sowore.

DSS: Your mum is Esther Sowore?

DSS: You said a brother of yours came here today?

DSS: What is his name?

DSS: Okay, what time did he come?

Sowore: A few minutes ago.

Sowore: Yes, he’s probably still within the premises, I mean outside the gate as we speak.

DSS: Okay, was he one of the ones that brought food to you.

Sowore: He accompanied the people that brought food.

DSS: He accompanied them, okay. Now, tell us about your family history, particularly marital life. Are you married?

Sowore: I am married, yes.

Sowore: She’s based in the United States at this point.

DSS: Okay, and do you have children with her?

DSS: How many children?

Sowore: Two that I know of.

DSS: Two that…hmmm, the others you don’t know?

Sowore: It’s not impossible. My dad used to say some kids you may never know?

DSS: Okay, just the two you know of, so what are their names?

Sowore: One is Kiribo, the boy, he’s the younger and the eldest is Omotone.

DSS: Okay, they live with you?

Sowore: In the US.

DSS: Okay in the US. Do you have a house in Nigeria?

Sowore: I do in my village.

DSS: In your village?

DSS: Okay, where is your village?

DSS: Apart from the one you have in the village; do you have a house anywhere…?

Sowore: Not at all.

DSS: You don’t have any?

Sowore: Except if it is office related.

Sowore: And that I cannot consider my private space.

DSS: Okay, now tell me about your educational background.

Sowore: I attended primary school in my home town.

Sowore: Actually, I was home schooled by my father as I travelled with him as a teacher. But I started officially in my home town in Local Authority Primary School, Kiribo.

DSS: From what year to what year?

Sowore: Maybe from 1976 to 1980. I spent only four years in primary school, I was promoted, I had double promotion to high school.

DSS: Okay, since then where have you worked?

Sowore: When I finished from the University of Lagos and after my NYSC, I worked briefly as an Organising Secretary for Democratic Alternative, it used to be a political party, one of the first political parties but then it was a Civil Society Organisation, it was a pro-democracy organisation.

After that, I left for the US. In the US I did all kinds of jobs.

Sowore: I worked as a refugee resettlement manager.

Sowore: And then after that, I also worked as a manager for catholic charity, it’s also for refugee resettlement.

Sowore: Before I proceeded to start Sahara Reporters.

Sowore: So, I worked at Sahara Reporter till 2008 or there about before taking up a part-time job as a lecturer in a university

Sowore: School of Visual Arts in New York which used to be known as Brooklyn Polytechnic, I also do that with City University of New York.

Sowore: I taught Post-colonial African History in those two schools.

DSS: Okay, so from what time to what time did you work in that university?

Sowore: I’m still working; I still work at the School of Virtual Arts as a part-time lecturer. They call us adjunct professors.

Sowore: Because it’s part-time, so I teach only one class from September to December every year.

Sowore: So, at Sahara Reporters I continued as publisher until last year. Since I ran for the office of President, I haven’t fully gone back there.

DSS: Is it registered?

Sowore: It’s registered in the US as Sahara Reporters Media Group.

DSS: Okay, no sort of registration in Nigeria, right?

Sowore: No, there is Sahara Reporters Media Foundation in Nigeria.

DSS: Okay, is it registered?

Sowore: It is registered with the CAC.

DSS: With the CAC?