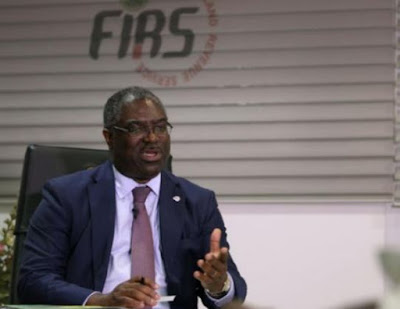 Fowler made this known on Tuesday night in Abuja, at the investiture of Hajia Kudirat Abdul-Hamid, as the 3rd National Chairperson of Society of Women in Taxation (SWIT).

Fowler was represented by a FIRS official, Mr Abiodun Aina.

He noted that aids, grants and loans were not reliable revenue sources to ensure the development of any economy.


The FIRS boss charged SWIT under Abdul-Hamid’s leadership to continue to educate Nigerians on why they should pay tax for economic and national development.

He added that on its part, the FIRS was working to ensure that the burden of taxation was reduced to the bearest minimum.

Although Fowler noted that Nigerians were not convinced that their taxes were being judiciously used, he said the Federal Government had been more prudent in utilization of generated revenue from taxation.

According to Fowler, revenue generated from taxation are currently being utilised by government to improve the country’s infrastructure, electricity as well as create employment.

He congratulated Abdul-Hamid on her investiture and prayed God to grant her a successful tenure as she piloted the affairs of the body.

Fowler, however, charged Abdul-Hamid to ensure that more women were made to study accounting, saying that they had greater roles to play to ensure that the younger generation paid their taxes.

“We encourage SWIT to continue in its good work, believing that jointly, we will move this country to greater heights.

“I pray that in your time, you will lead the society higher and higher and Nigerians will fill your impact and the impact of taxation in the country,” he said.

Abdul-Hamid in her remarks, assured that she would not let Nigerians and members of SWIT down.

She pledged that her administration would give listening ears to women and the citizens in general, saying, “we will not disappoint you or dash your hope.

“We shall ensure global best practices, value creation and addition; we hope to bring more women on board, including those operating in isolation.

“We will remain resolute in not just talking taxation, but working to ensure that Nigerians pay their taxes,” Abdul-Hamid said.

The investiture brought together renowned tax professionals and accountants from across country, including representatives of Institute of Chartered Accountants (ICAN) and Economic and Financial Crimes Commission among others.

Abdul-Hamid, a fellow of ICAN and Chartered Institute of Taxation (CIT) and a member of Nigerian Institute of Management, is presently the Auditor-General for Federal Capital Territory (FCT) Area Councils.

SWIT is an umbrella body of female members of Chartered Institute of Taxation of Nigeria (CITN) inaugurated to meet the yearnings and aspirations of women for recognition as a force to reckon with on tax policy issues.

It is also a forum for the promotion of social-economic development of women.