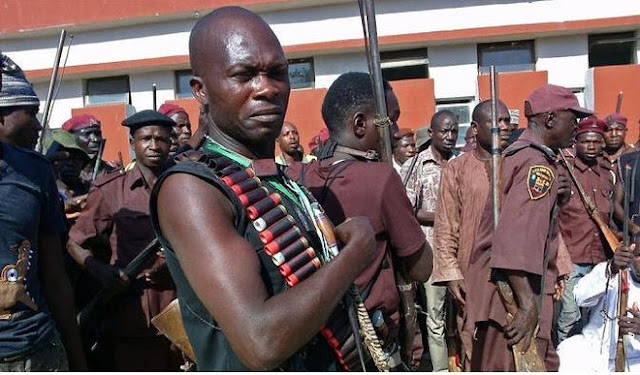 Disturbed by the increasing Boko Haram attacks on Gubio town and its environs, the Caretaker Chairman of Gubio Local Government Area of Borno State, Hon Zanna Modu has hired the services of 200 special hunters from some parts of Adamawa, Gombe, Katsina and other states in Northern Nigeria to complement effort of the military and other security agencies and nip the crisis in the bud.

Modu also said, five patrol Hilux vehicles were newly procured and would be handed over to these special set of hunters who are to work hand in hand with the security agencies and members of the Civilian Joint Task Force (CJTF). This was disclosed on Sunday by the Chairman while interacting with some Journalists on the modalities put in place to end incessant attacks.

Gubio is about 100km drive and North from Maiduguri, the state capital which has been witnessing series of attacks and destruction of properties in the last one month. Modu said, the measure to hire these special squad of hunters who are to be deployed for three months period is to ensure peace and resilience of fleeing residents return back to their communities.

Recalled that the renewed attacks by insurgents which led to the abduction of one member of Civilian Joint Task Force and killing of one of its Commanders have rendered hundreds displaced, with some taking refuge in Maiduguri Internally Displaced Persons (IDPs) camp. Briefing Journalists, the Caretaker Chairman said “All modalities have been concluded for the arrival of the special squad of the hired hunters to the state on Sunday 22nd September 2019 for onward movement to Gubio and its environs.

” Apart from other logistics, Governor Professor Babagana Umara Zulum has given approval for procurement of five new patrol vehicles. As it is, we have procured additional five new Hilux patrol vehicles which are to be handed over to these hunters any moment from now.” On how much each of these hunters would receive as their monthly allowances to carry out the task, the Caretaker Chairman however declined to give further details on the monies to be spent on the three months term of agreement, but said, the Council will utilize all the necessary resources at its disposal for security operatives to ensure safety of lives and property.