Sowore to be arraigned on Monday

9:14 AM CuteNaija 0 Latest News in Nigeria 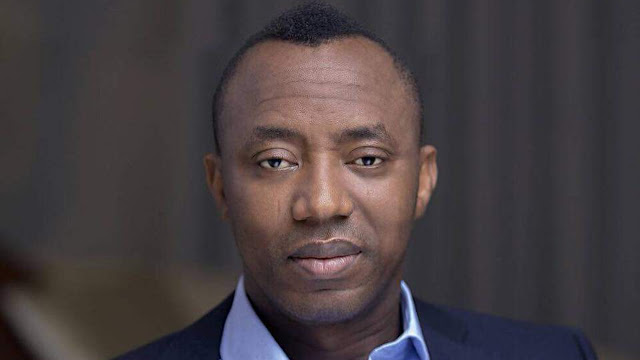 The Federal Government will, on Monday, arraign Sahara Reporters publisher and convener of #RevolutionNow protests, Omoyele Sowore, before the Federal High Court in Abuja.

He is to be arraigned on seven counts of treasonable felony, money laundering and cybercrimes which was instituted against him by the Office of the Attorney-General of the Federation.

The Department of State Service, which has been detaining the former presidential candidate since August 3, continues to hold him in custody in violation of the court order granting him bail six days ago.


Justice Taiwo Taiwo, who earlier on August 8, granted the DSS permission to hold the activist for 45, had on September 24, granted him bail.

Despite meeting the bail condition on September 25, Sowore has not been released by the DSS.

Multiple sources confirmed to our correspondent on Saturday that the criminal case instituted against Sowore was not assigned to Justice Taiwo Taiwo, but to Justice Ijeoma Ojukwu, who has subsequently fixed Monday for arraignment.

The DSS on August 3, 2019 arrested Sowore for calling for a revolution through a protest scheduled to hold on August 5.

On August 8, Justice Taiwo Taiwo in the Abuja Division of the Federal High Court granted the DSS permission to hold the activist in custody for 45 days.

Barely 24 hours before the expiration of the 45 days period on September 21, the AGF office, on September 20, filed seven counts against the activist.

On September 24, upon a request by Sowore’s legal team led by Mr Femi Falana (SAN), Justice Taiwo Taiwo granted bail to him with the sole condition that he deposit his passport in the court’s registry.

He has since met the bail condition.

In the charges instituted against the defendants, the prosecution accused Sowore and his co-defendant, Olawale Bakare, of committing conspiracy to commit treasonable felony in breach of Section 516 of the Criminal Code Act.

The prosecution alleged that the defendants committed the offence by allegedly staging “a revolution campaign on August 5, 2019 aimed at removing the President and Commander-in-Chief of the Armed Forces of the Federal Republic of Nigeria.”

The prosecution also accused them of committing the actual offence of treasonable felony in breach of section, 4(1)(c) of the Criminal Code Act, by using the platform of Coalition for Revolution, in August 2019 in Abuja, Lagos and other parts of Nigeria, to stage the #RevolutionNow protest allegedly aimed at removing the President.

It also accused Sowore of cybercrime offences in violation of section 24(1)(b) of the Cybercrimes (Prohibition, Prevention) Act, by “knowingly” sending “messages by means of press interview granted on Arise Television network which you knew to be false for the purpose of causing insult, enmity, hatred and ill-will on the person of the President of the Federal Republic of Nigeria.”

It also accused Sowore of money laundering offences in breach of section 15(1) of the Money Laundering (Prohibition) Act, 2011 by alleged transferring by means of swift wire, various sums of money from his United Bank of Africa Plc account with number 3002246104 into Sahara Reporters Media Foundation’s account with Guaranty Trust Bank in order to conceal the origin of the funds.

Although the Department of State Service has refused to obey the judge’s order, the media report said “security intelligence community” were shocked by Justice Taiwo’s decision to grant bail to Sowore and had decided to report the judge to the NJC.

The DSS has continued to hold Sowore in custody since August 3, 2019 in violation of the order by Justice Taiwo granting the activist bail on Tuesday.

Reacting to the report, Ubani, a former 2nd Vice President of the Nigerian Bar Association, said the attitude of law enforcement agencies could destroy the legal profession and called on lawyers to rise up against the menace.

He said, “It is high time lawyers stood up against this calamitous destruction of the legal system by the security agencies in Nigeria. We lawyers cannot keep quiet anymore because they are trying to destroy the only area where we are operating, which is the court.

“Judiciary is the only place where we operate, so if they succeed in destroying it, no one will have regard and respect for us and for the country.

“If lawyers allow the judiciary to be emasculated by the executive, we are finished; Nigeria is gone, the legal profession is finished. He therefore advised that all men and women of conscience should stand up and urge the Nigerian leaders to respect court orders. If we no longer want the judicial arm of government, the constitution should be duly amended to that effect and everyone will know that Nigeria has no judiciary anymore.”

Ubani however said the story about the plan to report the judge to the NJC might not be true “but a figment of the imagination of the reporter.”

He added that even if the DSS planned to appeal against the judge’s ruling, it was duty-bound to first obey the order.

On his part, Ogunye said the report “is being laundered” in order “to deliberately misinform and mislead the reading public and the Nigerian people on this issue.”

He also said the report was “calculated to justify the unwarranted and irresponsible disobedience of the court order granting Omoyele Sowore bail, pending the time he may be arraigned in court in respect of the charge/information said to have been filed against him.”

Ogunye said, “We are of the opinion that the story is meant to prejudice the enforcement of Omoyele Sowore’s right to liberty whenever he may be arraigned in court on the said charge/information, and frustrate the prospect of his being granted a post charge and arraignment bail; the story is preemptive and published to scare the trial judge that may preside over his charge, arraignment and trial, to refuse to exercise his discretionary power to grant him bail whenever he is eventually arraigned.”

He said contrary to “the misinformation” in the story that any person who is charged with the offence of treasonable felony in Nigeria is precluded from being granted bail, he noted that by virtue of section 161(1) and (2), of the Administration of Criminal Justice Act “all criminal offences, including capital offences, are bailable.”