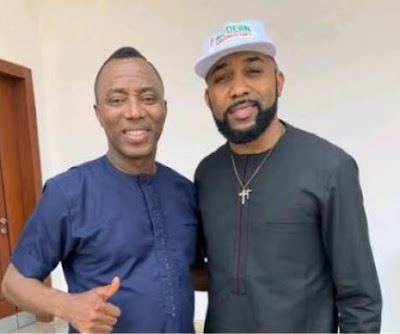 Musician turned politician, Banky W has reacted to the ruling of a Federal High Court in Abuja ordering the Department of State Services to immediately release pro-democracy activist, Omoyele Sowore, on bail.

Recall that Omoyele Sowore, a co-convener of the RevolutionNow movement was granted bail by an Abuja Federal High Court on Tuesday.

The Justice Taiwo Taiwo-led court said there was no longer a subsisting order holding Sowore in detention, hence the need to grant him bail.

Justice Taiwo, however, ordered Sowore to deposit his international passport to the court while releasing him to his lawyer, Femi Falana.


The co-convener of the RevolutionNow movement had allegedly called for a revolution over the supposed failure of the current Federal Government.

Reacting via his Twitter handle, Banky-W said Sowore endured hardship trying to speak up for a better Nigeria.

“I’m so thankful that our justice system made the right call by granting the release of Omoyele Sowore. Nigeria has a way of punishing the innocent and trampling on the rights, dreams and hopes of the regular citizens.

“Every time our leaders do wrong and get away with it, we lose a little piece of our soul. We become numb, we lose hope, and we subconsciously accept that this is how things are and there’s nothing we can say or do to change it.

“You didn’t need to be a voter or volunteer for Mr Sowore to see that this was clearly an infringement on a basic human right and a grave injustice. Freedom of speech and the right to peacefully protest is the unassailable right of every Nigerian citizen.

“May God bless those in our justice system who stood on the right side of history by doing the right thing.

“May God strengthen, comfort and bless Sowore, his wife and family as they have endured the most difficult of times while only being guilty of attempting to speak up for a better Nigeria,” he wrote.