8:12 AM CuteNaija 0 Latest News in Nigeria 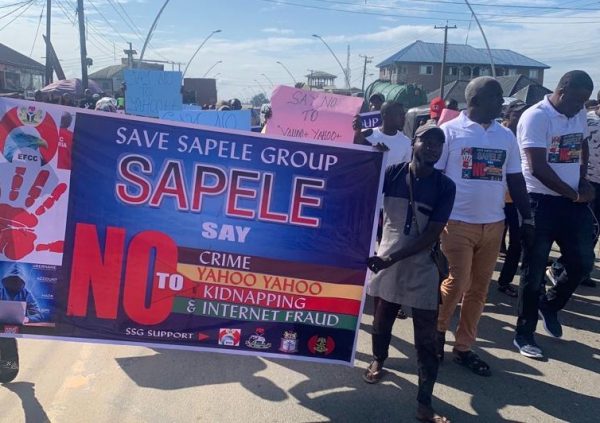 Youths in Sapele and its environ have staged a peaceful rally in support of the efforts of the Economic and Financial Crimes Commission, EFCC, to rid Delta State and the entire country of cybercrimes and other forms of economic and financial crimes.

The youths under the aegis of Save Sapele Group, carried banners and placards bearing various messages such as “Sapele Say No to Crime, Yahoo Yahoo, Kidnapping and Internet Fraud”, “Say No to Corruption”, “Protect our Youths, Daughters and Sisters – Say No to Yahoo Yahoo” and ” Say No to 419″, as they marched through the streets of Sapele.


The youths said the rally which is coming on the heels of several arrests of cybercrime suspects in the city, was to demonstrate their disapproval of the activities of elements that engage in activities such as internet fraud, cybercrimes and kidnapping in Sapele.

“We don’t want yahoo yahoo. We don’t want internet fraud, We say no to 419 and ritual killing”, a spokesman declared.

Tuesday’s rally in support of the Commission came few days after some youths in the area staged a protest against a sister agency, claiming that officers of the agency were instigating the frequent EFCC raid of Internet fraudsters in the city.