REVEALED: In 2015, Jonathan was under pressure to prosecute Buhari over certificate 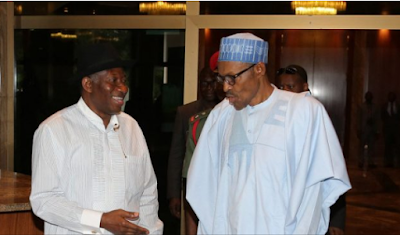 President Goodluck Jonathan came under pressure to prosecute Candidate Muhammadu Buhari over various allegations in the run-up to the 2015 presidential election — but he declined and eventually lost to the former military head of state.

Mohammed Bello Adoke, who was attorney-general of the federation and minister of justice under Jonathan, made this revelation in his memoirs, “Burden of Service: The Reminiscences of Nigeria’s Former Attorney-General”, which is due for release in Nigeria on September 16.

He said politicians brought up the issues surrounding Buhari’s secondary school certificate, the execution of three convicted drug couriers under a retroactive decree in 1985 and the 2011 post-election riots in which hundreds were killed as grounds for the arrest and prosecution of the flag bearer of the All Progressives Congress (APC).

“Buhari was accused of being in violation of the provisions of Sections 131 of the 1999 Constitution on minimum educational qualification and Section 31 (3) of the 2010 Electoral Act which required that copies of his school certificate be attached to the INEC Form CF001. Buhari did not attach the certificate. Law suits were filed in court. In all, there were 13 court cases challenging his eligibility, the most prominent being the one filed by a certain Chukwunweike Okafor. Indeed, many private citizens went to court to challenge Gen. Buhari’s eligibility,” Adoke wrote in the book published by Clink Street Publishers in London and New York and seen in advance by TheCable.

“While the controversy was raging, a West African Senior School Certificate (WASSC) purportedly issued by the Katsina State Ministry of Education suddenly surfaced on the internet. On the face of it was the picture of a 72-year-old Buhari. It was dated 21 January 2015 (meanwhile, Katsina State was created in 1987). The certificate also contained a grading scheme that was not in use in 1962, around the time he was said to have sat for the examination. This generated public outrage as people were questioning the authenticity of the certificate and whether, indeed, Gen. Buhari had the requisite qualification or had committed forgery. A lot of petitions were sent to the Office of the Attorney-General of the Federation requesting that Buhari be prosecuted for forgery and INEC be advised to disqualify him.

“In one instance, I received a letter from a lawyer asking for a fiat to prosecute Buhari on the ground of certificate forgery. I was constrained to deny the application as the lawyer had not furnished me the requisite material upon which I would exercise such discretion. Beyond applying for a fiat, the lawyer was also required to show evidence of having made a complaint to the police. A report detailing the outcome of the investigation was essential to ground such a fiat.”

THE MIMIKO CONNECTION
Adoke said at a point, Olusegun Mimiko, then governor of Ondo state and member of Peoples Democratic Party (PDP) — the party Jonathan belonged — asked that the lawyer be granted the fiat.

“A week later, I met up with Dr Olusegun Mimiko, then Governor of Ondo State, at his request. After the exchange of pleasantries, he brought up the issue of the lawyer’s request for a fiat to prosecute Gen. Buhari and appealed to me to grant it. I informed him that, regrettably, I was unable to grant the request for a number of reasons. I reiterated my response to that lawyer. I emphasised to Mimiko that the candidate in question was a former Head of State. In my opinion, even if he had no certificate, being a retired General in the Army, he must have passed Staff College which was more than an equivalent of the WASSC. I added that as a former Head of State, Gen. Buhari’s experience would be more than ‘an equivalent’ of a school certificate. I drew attention to the provisions of Section 318 of the Constitution to support my assertion,” Adoke narrated.

“When I left Mimiko, I became worried that there was something going on in the political environment that I was not aware of. I drove straight to the President’s residence. After recounting my interaction with Mimiko and the uncanny feeling that was bothering me to him, he calmly responded: ‘Do what is right.’

“Having had the presidential assurance to ‘do what is right’, I decided to be pragmatic… I knew my job was well cut out for me. I was a member of the National Security Council. I knew the implications of a breakdown of law and order were Buhari to be disqualified. Besides, President Jonathan had persistently assured the world that his ambition was not worth the blood of any Nigerian.”

Adoke said it was not just the certificate issue that was being used against Buhari.

“There was also the retroactive sentence and execution of three Nigerian citizens under his watch as military Head of State. At 8:30 am on 10 April 1985, three young Nigerians were tied to the stakes at Kirikiri Prison and executed by a military firing squad. Bartholomew Azubike Owoh, 26, a former employee of Nigeria Airways, Lawal Akanni Ojuolape, 30, a spare parts dealer, and Bernard Ogedengbe, a 29-year-old sailor, had been sentenced to death, separately, by a military tribunal in December 1984,” he wrote.

“They were found guilty of illegal possession of cocaine and heroin, punishable by death under Decree No. 20 of 1984. The death penalty was introduced after the offences had been committed. Despite the public outcry, the law was applied retroactively… In 2015, Buhari was being called upon to account for his past. People were ready to resuscitate the matter by liaising with the three families concerned to institute a suit against Buhari in the UK with a view to getting him arrested and put on trial under the principle of ‘universal jurisdiction’.

“Under this principle, former Heads of State could be prosecuted outside their countries for crimes committed while in office. General Augusto Pinochet’s case provided a good precedent for that contention. On 16 October 2008, the former Chilean dictator was arrested in London following his indictment for human rights violations by a Spanish magistrate for crimes allegedly committed by him while in office. He was held for over a year by the UK authorities before he was released, most likely on compassionate grounds because of his old age. He had ruled Chile for 17 years and had been accused of committing numerous human rights violations.

“I turned down all those who approached me to trigger the universal criminal jurisdiction principle to get Gen. Buhari arrested and put on trial abroad. The political future of Nigeria, I maintained, needed to be developed by allowing healthy contestation for office. I refused to have a hand in the attempt to give Buhari the Pinochet treatment. I briefed the President about it because some mischief-makers were already calling me a Buhari sympathiser for not toeing their line. I was branded a closet APC member too. The blackmail was sickening.

“President Jonathan, however, agreed with my position that we should not play the Pinochet card. He thought the government would be seen as encouraging ‘bad politics’ if we succumbed to that call. He was under intense pressure from some associates to use any means necessary to stop Buhari but he opted to participate in competitive politics in a fair and credible manner, not taking undue advantage of any quick-fix scenario that was presented to him. I strongly believed, on my part, that the electorate should be left the freedom to exercise their political judgment. It was not for us to use our institutions and the instruments of law to hound anybody.”

There was also the Lemu Panel Report that some people were eager to use against Buhari, Adoke alleged.

“Since 2011, there had been pressure on me to prosecute Buhari after the post-election violence in which over 800 people were killed. He was captured on video appearing to use violent language to incite his sup- porters during the campaigns. But I felt that those words were uttered in the heat of the moment as passions were inflamed. In any case, having won the election in 2011, Jonathan felt more compelled to build peace and assuage frayed nerves. Putting Buhari on trial would have further polarised a nation in which ethnic and religious sentiments are easily mobilised for political purposes. Based on these considerations, I declined to put Buhari on trial,” he wrote.

“The option was available, too, to refer the matter to the Office of the Prosecutor of the International Criminal Court (ICC) for crimes against humanity. It involved loss of lives due to electoral violence. We could have claimed that the political environment was such that would not allow for a fair trial in Nigeria and would have referred the matter to the ICC as governments in other countries were doing to their political opponents.”

He said the government of Jonathan decided not to go that route “not because we could not, but because it would further fracture the fragile peace in the country”.

If Jonathan was desperate to stop Buhari, he could still have gone ahead with the prosecution and damned the consequences, Adoke wrote.