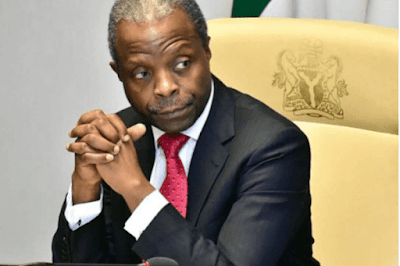 Yesterday, we concluded this discussion by narrating the dynamics that brought Professor Yemi Osinbajo into the equation of becoming the vice president in 2015. We did not hide the fact that it was the making of Asiwaju Bola Ahmed; a man God has used tremendously to pull many people from the political dungeon into the limelight, for Professor Osinbajo becoming what he is today.

Of course, we equally eulogized the outstanding potentials of the man in question; Professor Yemi Osinbajo, mostly in his academic pursuit of excellence and the uniqueness in revolutionizing the Nigerian Judiciary through the instrumentality of extra-ordinary brilliance.


Having properly recapped the genesis of this narrative from where we started yesterday, it is now most appropriate to embark on the body of the journey, otherwise called the Exodus. And because of the fact that any political journey is a voyage of discovery into, sometimes, the wild world of uncertainties, this narration itself is, expectedly, loaded with intrigues.

It is in an attempt to making the narration easier for the readers’ consumption that l positioned essential 7 questions above. Each and every one of these questions shall act as pillar or binocular of maritime navigation for safety of sailing in this crucial voyage. Answering question number 7, in reverse order, comes first, and that is the question if all that is “happening now” has anything to do with 2023 political garment.

Yes, everything happening in the presidency, as it relates to Professor Yemi Osinbajo strictly, has all to do with running for the office of the President in 2023. The route to wearing the presidential crown in 2023 is being paved with different precious stones, and this comes in different shapes as diversified personae dramatis are involved.

It doesn’t matter if the one paving the road is Ahmed Bola Tinubu [who nominated Osinbajo into that office in the first place], President Muhammadu Buhari; the Commander-in-Chief of every institution in Nigeria [we shall come to this soon when we shall look at constitutionality of replacing Economic Management Team with Economic Advisory Council by the president], El Rufai’s pronouncement from Kaduna on the “exigency of discontinuing with the hitherto acceptable rotation of power between North and South Nigeria”, a suddenly-discovered power block that could help Professor Yemi Osinbajo’s entry into the presidential race, or even the manifestation and full implementation of the Mafia’s Omerta golden rule of operation; which is what the Buhari Presidential Villa’s Cabal uses against Nigeria and Nigerians, what is at stake is the person that wears the Presidential Crown in 2023.

Having established this fact, we can now shift our attention to the “recent happening” within the presidency that necessitated this thorough evaluation. These happenings include, but not limited to, [A] Dissolution of Economic Management Team [B] Establishment of Economic Advisory Council, [C] Dissolution of Special Presidential Investigation Panel for the Recovery of Public Property (SPIP), [D] Transfer of some key aides of the Vice President away from him, and [E] Alleged N90 Billion help fund for election, from the FIRS to the APC through the Vice President.

I will be brief in analyzing these 5 issues but let me put to rest, most quickly, that number 5, though looking like the bad name a dog must have earned in order to hang it, remains a very porous allegation that might be difficult to prove. And it is one allegation that the Presidency, the Cabal that drives the presidency roughly, the government or even the All Progressive Congress cannot, and must not, attempt looking into, for obvious reasons, because if they do, the casualty will be the APC and the Government. This leaves 4 issues for consideration ipso facto.

Of all the 4 issues under contention, it is only one of them that is constitutional provided for and that is the National Economic Management Team. Even at that, it is not constitutionally quarantined to the Vice President of the Federation or his office exclusively, and this is where most of us get it wrong. The office of the Vice President of the Federal Republic of Nigeria, constitutionally speaking, is an “appendix”. If in doubt, please, read the Presidential Election Petition Tribunal judgement in a ruling on the 2019 Presidential election, where the Tribunal declared the vice president’s office as “appendix”.

It must have been for this reason that former President Olusegun Obasanjo jokingly told his vice president at a time that “you are a spare tyre in this vehicle”. The truth is that the 1999 Nigerian Constitution provides no explicit functionality to the Vice President. It is a constitutional lacuna that made the Nigerian President something of a Constitutional Monarch.

He is everything, according to Section 130(2). Whereas in defining the powers of the Federal Government, the Constitution vests legislative (Section 4) and judicial powers (section 6) in

Institutions and not individuals, Executive Powers (section 5) are vested in the person of the President. This is what the Constitution says:

“5(1): Subject to the provisions of this Constitution, the executive powers of the Federation –

(a) shall be vested in the President and may, subject as aforesaid and to the provisions of any law made by the National Assembly, be exercised by him either directly or through the Vice-President and Ministers of the Government of the Federation or officers in the public service of the Federation”

Is there any argument about the constitutional limitation of the Vice President [and his office] of the Federal Republic of Nigeria?

That is not to say that discretion cannot be abused or detrimentally used sometimes. I shall come to this tomorrow when, expectedly, a curtain should be drawn on this discussion, but not without shinning the light on many other facts presently being held captive by darkness.

Next week Monday, September 30, 2019, will make it a year since the collaboration between thenewsguru.com [TNG] and Lagos Talk 91.3 FM, which produced the popular Sadiq and The Guru [yours sincerely is The Guru] every Monday, from 9:30-11am live, on review of topical issues, came live on the Nigerian airwaves, having started the program on October 1, 2018. We hope to celebrate the anniversary in our own little and modest way that day.

This is, therefore, inviting all listeners to join the conversation, as usual, through telephone calls and other social media platforms as we shall be opening the lines for more than 1 hour that day, to hear from you what you think of the program and your suggestions for further improvement. Celebrate the faithfulness of God with us, as the One and a half hour Program religiously delivered for every single week of the year. It could only be God!