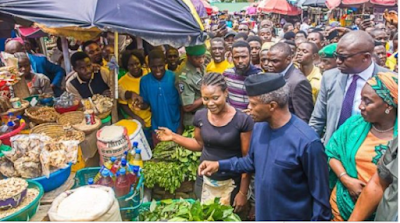 Members of the cabal in the presidency want the National Social Investment Programmes (N-SIP) ‘Tradermoni’ taken away from the Office of the Vice President and handed over to the newly created Ministry of Humanitarian Affairs, Disaster Management and Social Development.

Speaking with Daily Independent on Sunday, a credible source in the presidency said the deal had already been perfected and that Vice President Yemi Osinbajo may no longer be in charge of the Social Investment Programmes (SIP) ‘Tradermoni’ except President Muhammadu Buhari intervened.

According to our source, members of the cabal were not comfortable with the popularity the vice president was getting with the scheme, especially among the masses, hence the need to move it away from his office.

The Federal Government introduced a portfolio of social investment programmes in 2015 under the Office of the Vice President with the goal of taking millions of Nigerian citizens out of poverty.

TraderMoni is an initiative of the Federal Government, executed through Bank of Industry and Government Enterprise and Empowerment Programme.

TraderMoni is part of the Federal Government’s social intervention aimed at funding micro-businesses in the country through soft loans, beginning from N10, 000 to N100,000.

The programme was launched in August while the vice president began his tour in Osun State on September 3, 2018, barely three weeks to the Osun State governorship election.

In promoting the scheme, the vice president has visited markets across the country where he interacts with the traders.

Our source said the cabal believes the scheme was giving Osinbajo undue advantage and popularity across the length and breadth of the country.

The source said: “Yes, I can confirm that there are plans to move the scheme away from the vice president’s office. I don’t know whether it has to do with 2023 presidency, but the fact is that some power brokers in the presidency are not comfortable with the popularity the vice president is getting from the masses whenever he goes to promote the scheme, hence the resolve to move it to the new ministry.

“Aside from that, there have been allegations of corruption levelled against some officials handling the programme. Maybe they feel the newly created ministry will be well-equipped to handle the scheme. But except President Buhari intervenes, plans have been concluded to take the scheme away from the vice president’s office.”

“Which cabal? People are just playing politics. As far as I am concerned, there is only one presidency, not two: the president and the vice president.

READ ALSO: Osinbajo faces N90 Billion Scandal, this is why Cabals are ejecting him

“Since 1999, there has not been a smooth working relationship between the president and vice president like we have now between Buhari and Osinbajo.

“So, what is the proof that they want to remove the vice president or reduce his powers? Is it because of the Economic Advisory Team set up by the president? What is wrong with that? He did that to smoothen operation and to ensure that we move to the Next Level.

Momoh also denied the claim in some quarters that Abba Kyari, the President’s Chief of Staff, was more powerful and wielded more influence than Osinbajo in the current administration.

“When the president is going on vacation or indisposed, he writes to the National Assembly handing over to the vice president, why can’t he hand over to his Chief of Staff?

“The Chief of Staff is a person who moderates the movements of the President. He is the one who schedules the president’s affairs.

“Everyone who wants to see the president must pass through the Chief of Staff because he is like a gatekeeper to the president.

“From morning till night, he is at the beck and call of the president and should be the person who is closest to the president. Is that what makes him powerful than the vice president?”