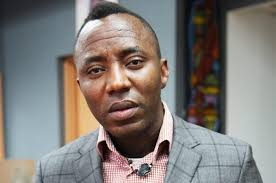 The police on Wednesday arraigned Agba Jalingo at the Federal High Court in Calabar, the Cross River State capital, after keeping him in detention for 34 days.

Jalingo, an ally of RevolutionNow Convener Omoyele Sowore, is a journalist and publisher of an online news site, CrossRiverWatch.

The journalist was reportedly picked up at his Lagos home on August 22 by security operatives from Cross River State Police Command and conveyed to Calabar, where he was detained for days without trial.

The police charged him with alleged terrorism, treasonable felony and attempt to topple the Cross River State government.


There was widespread condemnation of the charges when they were leaked to the public before the arraignment.

Jalingo pleaded not guilty to the four charges preferred against him.

Justice Simon Amobeda, who presided over the court, remanded the accused in prison when the application for his bail could not be considered.

The judge held that the counter-affidavit the prosecution filed in response to the motion for bail by the defendant’s counsel was added to the file.

He said there was not time to look at it.

Justice Amobeda also said he perused the file on Tuesday night and did not see the counter-affidavit.

The prosecution counsel, Denis Terhemba, a Deputy Superintendent of Police (DSP), claimed the counter-affidavit was filed on September 18, but Jalingo’s counsel Attah Ochinke said he was served before the court began sitting.

But after a brief discussion with the Clerk of the court, who whispered a few words to him, Justice Amobeda ruled that Jalingo be remanded in Afokang Prisons in Calabar.

He adjourned the matter till today.

Responding to the ruling, Ochinke said: “We had an application for him to be granted bail, but because of the reaction, the counter-affidavit was only brought to the attention of the court today (yesterday). The court graciously granted us to come back tomorrow (today) for the argument on the application for bail. We hope that by tomorrow, the court will give a considered opinion on it and Agba will be admitted to bail.”

The lawyer, who described the charges preferred against Jalingo as “sensational”, added: “We have looked at the proof of evidence and we know that they have no basis. We are ready to stand trial.”