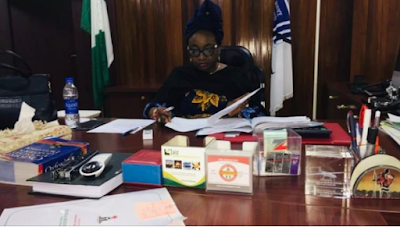 The Muhammadu Buhari administration will not shy away from its total commitment to fighting corruption, and there will be no sacred cows in the course of the fight, a group campaigning for the administration said today.

According to the Buhari Media Organisation (BMO), the decision to relieve Winifred Oyo-Ita of her position as Head of Service (HoS) of the Federation is another proof that this government would not allow people with questions to answer to remain in office longer than necessary.

In a statement signed by its Chairman Niyi Akinsiju and Secretary Cassidy Madueke, BMO said that the action is bound to send clear signals to public office holders on consequences for misdemeanours under the watch of President Buhari.

“This is another sign of the President‘s zero-tolerance for acts such as that which Mrs Oyo-Ita is being investigated for by the Economic and Financial Crimes Commission (EFCC).

“Buhari has, on several occasions, maintained that the anti-corruption stance of his administration is non-negotiable and it is quite clear that he won’t tolerate any iota of verifiable scandal among key government officials.

“In this case, the anti-graft agency had been investigating Mrs Oyo-Ita over an alleged N3 billion contract scam, abuse of duty tour allowance, money laundering, among others, during her previous position of permanent secretary.

“So, like President Buhari did in the ‘grass cutting scandal’ when he sacked the former Secretary to the Government of the Federation (SGF) Babachir Lawal for allegedly defrauding the Federal government to the tune of five hundred million naira (N500m), he had no misgivings about sending Oyo-Ita on indefinite leave.

“It is also somewhat ironic that the former HoS was relieved of her job on the same day that the EFCC presented a key prosecution witness in continuation of the trial of the former SGF.

“All these are enough proof that the Buhari administration is not prepared to look the other way and ignore cases of financial misdemeanours against top government officials at the same time that some members of the previous administrations were standing trial”, it said.

BMO also said the delay in taking action on the former Head of Service even after news of the investigation broke, is a reflection of the painstaking way the administration conducts its activities.

“We have seen how opposition elements and their supporters push false narratives of an alleged bid by some unnamed Presidency officials to shield Babachir Lawal of prosecution, even after he was indicted by the House of Representatives.

“Yes, it indeed took time before President Buhari acted, but he left no doubt about his readiness to follow due process by first suspending Babachir Lawal on April 19 2017, before officially relieving him of all duties on October 30 2017, for misappropriating funds intended for alleviating the food crisis in Internally Displaced Persons (IDP) camps in North-East Nigeria.

“And in Oyo-Ita’s case, there were suggestions that she had turned in her resignation letter few weeks ago but the Presidency rejected it until now that unexpectedly a statement was issued announcing that she was proceeding on indefinite leave to allow for completion of investigations.

“This goes to show that President Buhari is prepared to give room for benefit of doubt and allow the law to take its full course.”

The Buhari group also assured Nigerians that the administration would ensure that the former Head of Service and others alleged to be involved have enough opportunity to clear their names if the EFCC considers it necessary to charge them to court.