Oro worshippers, Muslims, in war of words over festival 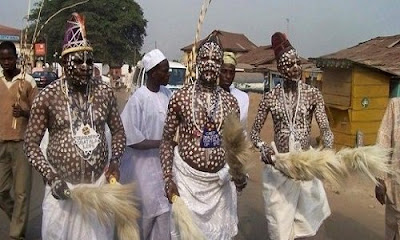 The controversy surrounding the celebration of Oro traditional festival in Iseyin town, Oyo State, on Wednesday took a new turn, as worshippers of the deity pointed accusing fingers at the Nigerian Supreme Council for Islamic Affairs (NSCIA),over allegedly instigating the government to cancel the annual festival.

The leaders of Oro deity had directed the worshippers to go ahead with their planned 17-day festivities, in defiance of a government order, which stopped the festival.

The traditionalists, in a statement signed by one of their leaders, Chief Oloyede Orogbensola, said there was no legal pronouncement stopping the festival.

Orogbensola, who signed a statement on behalf of the Traditional Religions Worshippers’ Association of Nigeria, accused NSCIA, Iseyin chapter, of intolerant of other religions.


The NSCIA had through its officials, including the Publicity Secretary, Maruf Mustapha, warned against the 17-day set aside for this year’s festival.

It said such celebration usually impugned on the rights of the people in the area to go about their lawful duties without hindrance and also had the tendency for adherents to resort to violence and maim its members, as witnessed in the past.

But Orogbensola urged Governor Seyi Makinde and the public to ignore the tissue of lies and misinformation being spread by NSCIA that Oro worshippers were violent and had been disturbing the peace of the town over the years.

He noted that contrary to the lies that Oro worshippers had been attacking Muslims and non-Muslims in Iseyin, the worshippers and other traditionalists had always been at the receiving end of violent attacks from Muslims over the years.

He added that despite the unprovoked attacks on Oro worshippers by the Muslim groups, the festival would go ahead as planned on September 22 because there was no legal restraint against the annual festival.

The traditionalists said the claim by the Muslim group that the Oro festival would last 17 days was another attempt at exaggeration and blackmail, noting that it is only slated for two of those days, the seventh day and the 17th day that women are banned from seeing the masquerade.

They said the other days were for festivities.