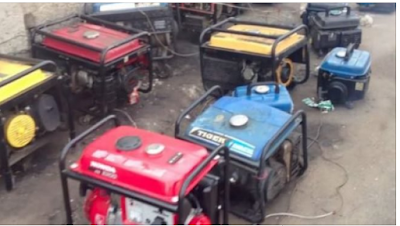 Business owners and individuals in Nigeria spend about $12 billion fueling generators every, according to a report by Bloomberg.

Quoting a survey by NOI Polls, the report said households with access to on-grid electricity had an average power supply of only 9.2 hours a day in the first half of 2019.

It said in Nigeria, almost everyone, including President Muhammadu Buhari, depends on generators.

“To keep out the darkness, households own and operate an estimated 22 million small gasoline generators, whose combined generating capacity is eight times higher than on-grid supply, according to a June 2019 presentation by Dalberg, a global policy and advisory firm,” the report read.

“Nigeria is only able to send about a quarter of its total power capacity to homes and businesses due to a poor and dilapidated power infrastructure, much of it installed in the 1980s.

“The country’s transmission lines can ‘theoretically’ carry about 7,500 megawatts, according to the country’s electricity regulatory authority.”

Citing data published by the Central Bank of Nigeria (CBN), Bloomberg said Nigerians consumed an average 3,713 megawatts of electricity from the grid in 2018.

The report said one Kabir Sabo, an Abuja-based tailor, spends an average of N3,000 a day on his generator.

Bloomberg quoted Sabo as saying: “When you are a small business owner in a country where there is no power, it really is depressing. I have on multiple occasions shut down to take up a monthly paying job. It’s difficult to run the business when most of your earnings go on paying bills, buying fuel and all sorts of things.”
The report said Sabo’s work is being affected by the “long blackouts”.

“I am willing to pay more if it means I will not have to rely on the generator to run my business,” the tailor reportedly said.