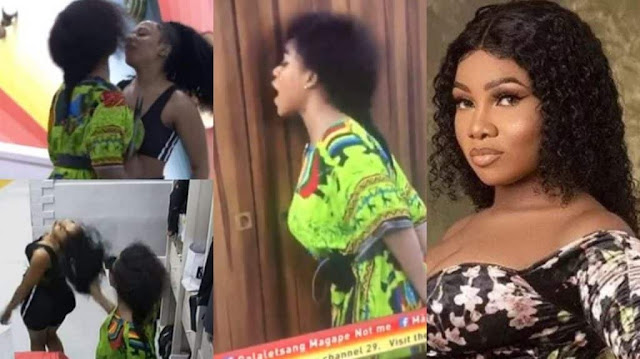 Several Nigerians on social media are divided over the disqualification of Tacha from the 2019 edition of the Big Brother Naija reality TV show.

Tacha was disqualified on Friday for physically attacking a fellow housemate, Mercy.

Tacha and Mercy had been embroiled in a shouting match, which turned physical after Tacha grabbed Mercy’s hair and she, in turn, tried to defend herself with an electric iron.

For her part in the altercation, Mercy got two strikes. One more strike and she would also be disqualified from the house.

Since the punishments were meted out by Big Brother, social media has been agog with reactions, especially over Tacha’s disqualification.


I've never seen Nigerians this happy in a long time.
Tacha has been a pain in the ass.
😂 #BBNaija19 pic.twitter.com/YiXahJqJae
— Tylah Opara (@OparaTylah) September 27, 2019


The last time I was this happy is when Abacha died. #Tacha bringer of body odour, drama queen, no leave no transfer till day 99, PH 1st sometin. LMAO #BBNaija
— Yene (@BlicksBarak) September 27, 2019

It's one of the most emotional nights for me this year.

Honestly I don't know what it is about you Tacha, I see your flaws... Honestly it fucks me up everytime but I still love you baby ❤❤❤


I can bet the Organisers of the #Bbnaija will feel the Negative Financial impact of disqualifying #Tacha.
Except her Army decides to direct their Voting strength to another Housemates (aside Mercy) to ensure She(Mercy) doesn't win#ByForceLeaveAndTransfer
— Njoku Mitchell (@njoku_mitchell) September 27, 2019


I one zillion times don't care who wins the #BBNaija Show! The GoFundMe account should be opened for Tacha to start running already. we crown her same day they crown their winner.
— Engr. Rita (@EgwuRita1) September 27, 2019


Tacha got what was coming to her. From the onset of the show, clashing with EVERYBODY. Mercy was in the wrong today as well yes, but she hasn’t clashed with people like Tacha. The HMs love Lambo! Tacha needs to think about her life. GOOD BYE!!! #BBNaija #NoLeaveNoTransfer 🤦🏽‍♀️🤣🙄
— Kachi A. (@olanna112) September 27, 2019


As much as I'm happy that Tasha has been disqualified I really pity her...
No hug from a single person, no friendly goodbye from anyone and the words on the media street about her at the moment I just hope she wouldn't commit suicide #Tacha #BBNaija
— Great Grace 😀 😀 🇳🇬 ❤️ ❤️ ❤️ ❤️ 🇱🇷 (@RealDeltaBlood) September 27, 2019


Jaruma has deleted everything Tacha related 😂 Peter has denied his tweet of giving her the 60m 😂😂😂. This life is really pot of beans #BBNaija
— Jameela Abubakar (@Jamee_Abubakar) September 27, 2019


I love the description on her page it says it all
Tacha ws daring
Tacha ws misunderstood
Tacha was fearless
9 nominations wld have been 10 on Sun
She was & still is a Titan
Only Biggie could take her out
The organizers & sponsors knew this.
She was right
No Leave
No Transfer pic.twitter.com/moqYppzsAi
— Mrs Osagiede (@MrsOsagiede) September 27, 2019


The exit of Tacha from the #BBNaija, is a win win for humility, decency and heavy loss for arrogance and uncultured behaviour. Lesson to us (viewers) and other housemates. pic.twitter.com/A95DqDMJjl
— Chinonso Nwaoriaku (@CNwaoriaku) September 27, 2019


The exit of Tacha from the #BBNaija, is a win win for humility, decency and heavy loss for arrogance and uncultured behaviour. Lesson to us (viewers) and other housemates. pic.twitter.com/A95DqDMJjl
— Chinonso Nwaoriaku (@CNwaoriaku) September 27, 2019


As much as I don’t like Tacha I didn’t want her to be disqualified .i wanted her to lose plainly 💔💔
Now these dumb fans will keep saying she would have won if not for disqualification 🤦🏽‍♂️#BBNaija19
— Ewure Of Africa 💧 (@Dehkunle) September 27, 2019