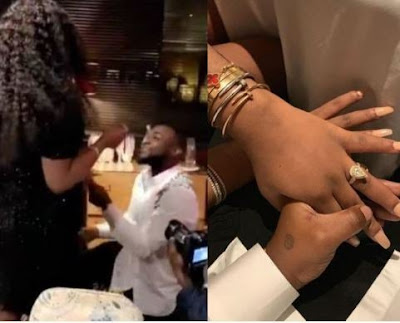 Nigerian pop-star, Davido on Thursday proposed to his girlfriend, Chioma.

Davido who had earlier announced his introduction to Chioma disclosed this on his Instagram page.

Alongside a picture of Chioma with a ring on her finger, Davido wrote: “She said Yes! Big Rock! Assurance 2020.”

Since the proposal video had gone viral, it has elicited different reactions from Nigerians on social media

Check them out below

Pls Dear Lord when i get married..Let it not get to a point in the marriage where is one young girl like that, that would be exciting my Husband..Amen.
Congrats #Davido and Chioma

In my head, i thought Davido and Chioma were already married. Maybe this thought is due to the numerous publicity on their relationship, i really wish they could do things lowkey.

All the people that were saying Chioma was a fool for staying with Davido, you people should come and talk now o... https://t.co/Rp7Na24QcN