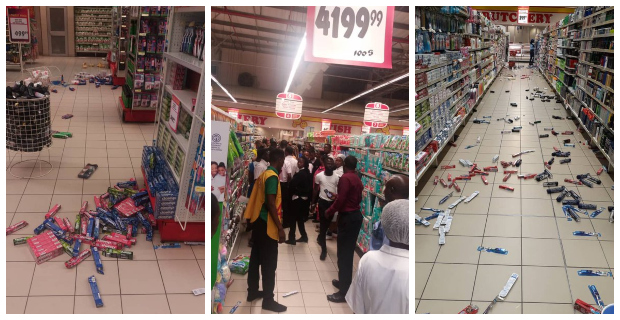 They attacked businesses linked to South Africa, whose citizens have been ceaselessly killing Nigerians and destroying their businesses.

There was an attack on Shoprite outlets at Circle Mall in Lekki, Lagos, which turned bloody, MTN facilities at Apapa also in Lagos and in Uyo, the Akwa Ibom State capital.


The Uyo office of MTN had its glass doors and windows smashed by the angry youths. Attempts by protesters to torch some other MTN offices in Lagos were foiled by security operatives. 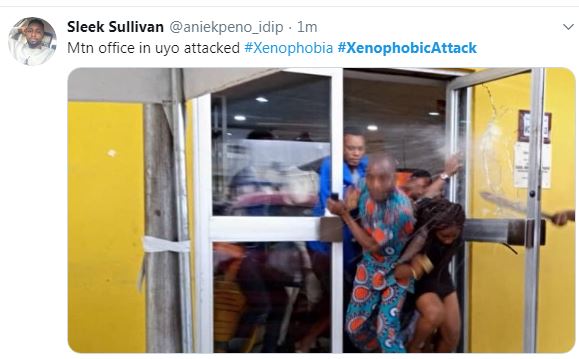 Some placard-carrying youths were at the Ikeja Shopping Mall to protest the killings. They chanted revolutionary songs and disrupted businesses at the Ikeja Mall, which houses the Shoprite outlet.

The Ibadan Mall where Shoprite is located was picketed by youths.

In Surulere, Lagos, another set of youths attacked and looted PEP shops at Eric Moore before the police came to disperse them. PEP is South African largest single brand retailer.

At the Sangotedo/Lekki Mall, two people were feared dead in the confrontation between the police and the youths while no fewer than five policemen were taken away injured.

More than 60 people were arrested.

A police van was burnt by the rampaging youths who carted away goods including electronics and other household items from the stores after driving out workers.

The attack which started in the afternoon was still ongoing as at 9pm with the police struggling to contain the protesters. The police shot sporadically when the youths refused to heed the advice to halt their activities, leading to stray bullets hitting the people that died. But there was no official confirmation of deaths as at 10pm last night.

Both the federal and the Lagos State governments called for restraint.

The Federal Government condemned the killing of Nigerians, which Vice President Yemi Osinbajo described as “unacceptable and unconscionable”.

In Abuja, Minister of Foreign Affairs Geoffery Onyema summoned the South African High Commissioner and requested for a halt to the killing of Nigerians and the attack on their businesses. He also called for compensation for the victims.

The attacks on businesses linked to South Africa in the country followed consistent killings of Nigerians in South Africa and the looting and destruction of their shops.

Businesses at Shoprite outlet in Osapa London, Sangotedo on Lekki-Epe Expressway, were said to have been grounded as protesters specifically ordered all customers inside the outlets to leave.

The Lekki protest which commenced around 3:30pm turned violent after stray bullets killed two young men. Policemen were drafted to disperse the youths, who had forced their way into the mall.

According to sources, the protests started when a group of angry women, said to be relatives of those who fell victims to the attacks in South Africa, entered the Lekki Shoprite started and upturning shelves with groceries and toiletries.


The police shot sporadically following attempts by the mob to set Shoprite ablaze.

It was learnt that three youths died. But there was no confirmation from the police.

In no time, more youths converged and ordered everyone out of the outlet gathering used tyres in preparation to setting the place on fire.

According to a resident, Semiu Ibrahim, more than 17 police vehicles were deployed as they released teargas canisters.

He said a young man killed was an observer.

“Those protesting wanted to burn down the place and the police started shooting. They threw teargas as well. The whole thing started around 3:30pm. They came and asked people in the mall to leave. They wanted to burn the place.

“The police pleaded with them not to do it but they were not listening and the police started shooting. Bullet hit and killed a young man who was observing what was happening.

“There were about 20 police vehicles there. The protesters were more than 100”, he said.

Lagos Police spokesman Bala Elkana, a Deputy Superintendent of Police (DSP), said they had to send reinforcement to the place because the mob was out to burn the facility which “doesn’t even belong to South Africans in the first place.”

He said: “We are still battling with this issue. I do not know for now if anyone was killed. But I can tell you that those youths were not protesters. They were out to burn down the shopping mall and cause problem.

“The police had to quickly move in to prevent that. They are riotous and we had to send in reinforcement. We are still here,” he said last night.

Some youths staged a peaceful protest at the Dugbe, Ibadan branches of Shoprite and StanbicIBTC Bank.

The two are among the popular companies owned by South Africans in Nigeria.

An eye witness revealed that the youths, numbering about 50, stormed Shoprite around 5:00 pm to register their displeasure over the killings. He said they did not disturb operation of the company though they caused a stir in the shopping mall which houses many other retailers and the historic Cocoa House.

On sighting the protesters, the management of Odu’a Investments Limited, owners of the property, alerted the police which quickly drafted its men to the premises.

The eye witness added that the youths moved over to the nearby branch of StanbicIBTC Bank after only 15 minutes before moving over to the bank.

In Uyo, Scores of youths launched an attack on the MTN office located along Ikot Ekpene road and a few metres from the town campus of the University of Uyo.

Earlier on Tuesday, some private radio stations aired phone-in programmes on the killings and attacks on Nigerians in South Africa.

Many callers expressed their anger over the unfortunate plight of Nigerians and called on the government to take drastic actions to stop the onslaught.

It was gathered that the attack on the MTN building started at about 2.30pm with the rampaging youths destroying glass doors and windows of the facility.

She said: “They ordered people out, destroyed computers, and took away cash and customers’ phones. We ran away through the backdoor to safety.”

There was no casualty.

It is not clear if the attack was an isolated incident.

The police spokesperson in the state, Odiko MacDon, did not immediately respond to calls and text messages sent to him.

However, an eyewitness who pleaded not to be named said: “The attack on the MTN shop in Uyo is most unfortunate because neither the building nor the computers belong to the South African people or government,” a citizen who did not want his name in print, said, adding, even the people working there are our brothers and sisters.”

In a statement on Tuesday, the Chief Executive Officer, MTN Nigeria, Ferdi Moolman, said the company was against all forms of violence and xenophobia against people.

“MTN Nigeria strongly condemns hate, prejudice and xenophobia and reiterates its unequivocal condemnation of all violence. We seek to connect people, bring people together and provide a platform for everyone’s voice to be heard. We are against all forms of bigotry and discrimination; they should have no place in society,” he added.