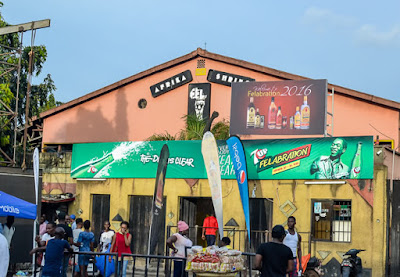 The Lagos State Task Force has arrested 28 miscreants and 15 illegal street traders at various locations around Alausa and the Afrika Shrine vicinity.

The chairman of the agency, CSP Olayinka Egbeyemi, disclosed this in a statement by the agency’s Head of Public Affairs Unit, Mr. Adebayo Taofiq, on Sunday in Lagos.

Egbeyemi said the raid was due to the nefarious activities within the vicinity of the Afrika Shrine which presented a negative image to tourists and residents of Lagos.

“Operatives of the Lagos State Environmental and Special Offences Unit, over the weekend, raided all streets within Central Business District, including surroundings of the ‘Afrika Shrine’, Alausa, Ikeja.


“The enforcement operations became imperative following complaints from members of the public about the criminal activities of miscreants and environmental nuisance of illegal street traders around the Shrine,” he said.

According to the chairman, the night operation was carried out around Afrika Shrine where sales of hard drugs like Tramadol, codeine, ‘skunk,’ weed, illegal mixed liquor and assorted foods take place.

“These consumable and non-consumable items are freely sold on the streets in defiance of security agencies and government authority,” he said.

Egbeyemi maintained that the enforcement operations would be a continuous exercise in line with the vision of the present administration to rid the state of street urchins and criminals.

“The Lagos State Government has vowed to sustain the security onslaught on all areas identified as criminal hideouts and hard drug outlets across the state, especially within the metropolis,” he said.

One of the arrested suspects, Tunde Babalola, who was caught with a bag of substance suspected to be Indian hemp, confirmed that he had been selling hard drugs for eight years.

Babalola said that dealing in hard drugs was a lucrative business, saying he realised an average profit between N60,000 and N100,000 weekly from customers around Obalende, Akala, Mushin, Bariga and Ikeja.

An arrested illegal trader, Mrs. Abike Adeyemi, said she paid N1,900 every week to a representative of Ikeja Local Government from the sales of ‘skuchies’ and ‘hot drinks’ around the Afrika Shrine.

The Task Force Chairman said the Lagos State Commissioner of Police, CP Zubairu Muazu, has directed that all those arrested be immediately prosecuted.