Minimum Wage: Why discussions broke down 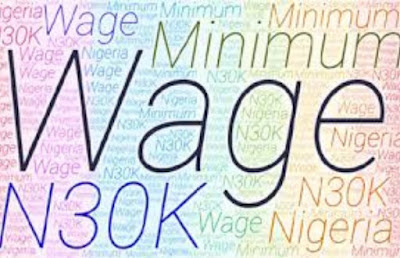 The acting chairman of the JNPSNC (TUS), Simon Anchaver and the Secretary, Slate Lawal in a statement which they gave, detailing the breakdown in negotiations with government representatives, appealed to the general public to plead with the Nigerian Government to implement the proposed N30, 000 minimum wage.

According to them, the implementation will prevent an occasion of the union embarking on strike.

Anchaver said that all efforts by the trade unions to persuade the government to implement the new wage were unsuccessful and this has lead them to withdraw any further notification to the Federal Government before embarking on a strike, Vanguard reports.


“When the meeting reconvened on September 16, the government officials brought a fresh proposal of 11 per cent pay rise for officers on grade level 07 to 14 instead of its earlier position of 10 per cent and 6.5 per cent for those on grade level 15 to 17 instead of the former 5.5 per cent.”

The union is convinced that the government was not serious about paying workers a
“new national minimum wage and adequate consequential adjustment, but preferred taking them for a ride”.

Anchaver said, “It is difficult to understand why the political appointees who cart millions of naira away every month are determined that Nigerian workers must not get N30,000 monthly minimum wage with fair consequential adjustment.

The organisation beckoned royal fathers and religious leaders to appeal with the Federal Government to implement the minimum wage with adequate consequential adjustments to avoid the looming industrial crisis.