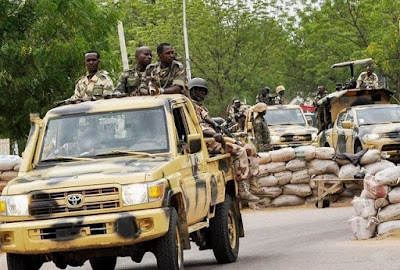 The Nigerian military has detained at least 3,600 children in the north-east where the Boko Haram war is being fought, according to Human Rights Watch (HRW).

In a new report released on Tuesday, HRW said most of the children including 1,617 girls, are being detained at Giwa military barracks in Maiduguri, Borno state capital.

The international human rights organisation said the military has since 2013, arbitrarily detained the children in “degrading and inhuman conditions” for suspected involvement with the Boko Haram insurgents.

It said the report, which can be downloaded on its website, documents how Nigerian authorities are detaining children, often based on little or no evidence.

“Many children are held without charge for months or years in squalid and severely overcrowded military barracks, with no contact with the outside world,” it said.

HRW added that it spoke with 32 children and youth who had been in such detention facilities including one who was quoted as saying they “packed tightly in their cells with hundreds of other detainees like razor blades in a pack.”

“None of the children said they were taken before a judge or appeared in court, as required by law, and only one saw someone who he thought may have been a lawyer. None were aware of any charges against them. One was detained when he was only 5 years old,” the organisation said.

The organisation alleged that the military arrested the children during operations, security sweeps, screening procedures for internally displaced persons, and based on information from informants.

“Many of the children said they were arrested after fleeing Boko Haram attacks on their village or while seeking refuge at camps for internally displaced people,” it said, quoting one as saying he was “arrested and detained for more than two years for allegedly selling yams to Boko Haram members.”

‘INHUMANE CONDITIONS IN DETENTION FACILITIES.’
HRW quoted some of the children interviewed as saying they shared a 10-by-10 meters single cell “with 250 or more detainees.”

“They said the stench from a single open toilet was often overwhelming and that detainees sometimes fainted from the heat,” it said.

“Nearly half of the children said they saw dead bodies of other detainees at Giwa barracks. Many said they suffered frequent thirst or hunger.

“The children said that Giwa has a cell for boys under 18 with children as young as 7, or even younger. The military also detains children in adult cells, where children said food and water were scarcer and conditions even more crowded.”

HRW urged the federal government to release the children and adopt the United Nations handover protocol to ensure their swift transfer to child protection authorities to get rehabilitated and reunited with their families.

“If military or intelligence authorities have credible evidence of criminal offenses by children, they should transfer them to civilian judicial authorities to be treated in accordance with national and international juvenile justice standards,” it added.

Onyema Nwachukwu, spokesman of defence headquarters, did not immediately reply a text message seeking his response to the report.