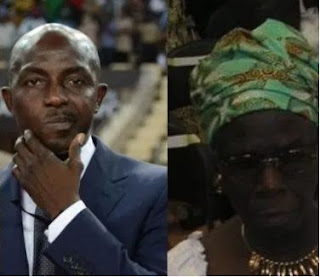 Mrs Beauty Ogere Siasia, the abducted mother of former Nigerian coach, Samson Siasia, has finally been released by her kidnappers.

The 80-year-old Madam Siasia was freed on Sunday after spending 77 days in the custody of her abductors.

The mother of the former national coach said she had been a target of frequent kidnapping by gunmen because they believed that her ex-coach son was a wealthy man.

Madam Siasia said this in an interview at her residence in Odoni community shortly after she was released by her abductors, and re-united with her family.

According to her, the hoodlums decided to let them go on Sunday because they became “tired of our problem,” adding that she was ill before they took her away in July.

Madam Siasia, while narrating her ordeal, said, “I was at my house when they came to kidnap me. They took me to their place. They took care of me. When I was sick, they bought drugs. They cooked and gave to me.

“They didn’t beat me. There were days that there was no food. Those days, they ‘drank’ garri and gave me garri to drink too. Sometimes, they cooked soup, prepared garri and we ate. But on Sunday, they told me we had stayed for too long and they were tired of our problem.

“They built a small house and used tarpaulin to cover the top. That was where they kept us. They kept worrying me because they said my son, Siasia is rich and a millionaire.

“As I am talking to you, I am not well. Before they took me, I was not well. I want to go to the hospital.”

It was gathered that there was jubilation at Odoni community in the Sagbama Local Government Area of Bayelsa State after she was safely brought home.

Heavily armed gunmen invaded her residence in Odoni and took her away on July 15, 2019.

It was the second time in four years the octogenarian would be whisked away from her sleepy community armed men.

She was abducted in November 2015 by a gang of gunmen who released her after spending 12 days with them.

The state police command confirmed the release of Madam Siasia in a statement in Yenagoa on Sunday by the Police Public Relations Officer, Mr Asinim Butswat, a Superintendent of Police.

He said the victim regained her freedom in the early hours of Sunday.