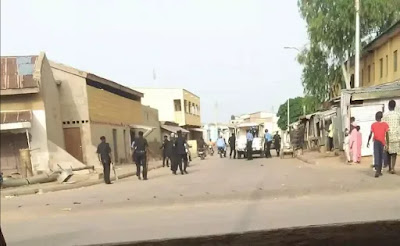 As Shi’ites vow to mark its annual Ashura procession on Tuesday, a special strike force from the State Police Command consisting of over 200 armed police officers, embarked on a motorised patrol of the city, as early as 6:00 a.m., warning that it will not condone any form of procession, unlawful assembly  or demonstration by any group in the state.

In a press statement, issued and signed by the Kano Police Command’s spokesman, DSP Abdullahi Haruna, the Commissioner of Police, Ahmed Iliyasu,  warned that anyone caught flouting the order would be arrested and charged to court for prosecution.

According to the statement, the Command would not tolerate any form of unlawful assembly or procession in whatever form,  warning that anyone caught in the act would be made to face the wrath of the law.

Also, the statement disclosed that the CP had ordered a 24-hour patrol of the metropolis by a special strike force to ensure compliance with the ban on procession or demonstration.


The Kano State Police Command’s statement partly read, “The ban on all forms of rallies, demonstrations, processions or unlawful assemblies is still in place.

”Members of the public, civil society organisations, political parties, religious groups including Shi’ites, NGOs and other groups under whatever guise are warned to adhere to the suspension order until further notice.

“This is to assure lasting peace and unity in the State.

”Once again, whoever violates the law on the position of the command in maintaining peace, law and order, tranquility and well-being of the public and promoting unity among the people of the state will be dealt with in line, with the extant laws of the land/state.

”Any person or group of persons found to engage in any unlawful assembly or procession will be arrested and prosecuted in the Court of Law.”