‘I am dying slowly with one kidney’, says bomb blast convict Okah 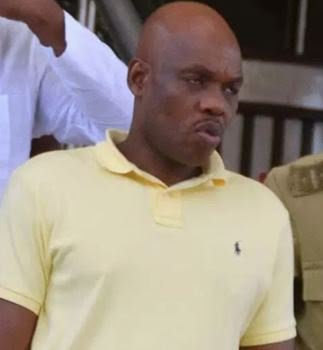 The man convicted of masterminding the 2010 Independence Day anniversary in Abuja, Charles Okah, claims he is dying slowly in prison owning to lack of access to medical treatment.

Okah who is currently confined in the Maiduguri prison says he has been living with a kidney in the last 37 years but his condition is deteriorating in prison.

He wants the Comptroller-General of Nigerian Correctional Service, Ja’afaru Ahmed to either transfer him to Abuja or Lagos for better care.

Okah was jailed for life with his co-defendant, Obi Nwabueze, for masterminding the bomb blasts which occurred in Abuja on October 1, 2010 and, earlier in Warri, Delta State, on March 15 of the same year in a court presided over by Justice Gabriel Kolawole.


The two convicts were said to have conspired with Henry Okah, who was the leader of the defunct Movement for the Emancipation of Niger Delta (MEND).

Henry was jailed by a South African court in 2013 for similar offences and sentenced to 24 years’ imprisonment.

The conviction is currently before the Court of Appeal.

But Okah said he is almost losing the only kidney left with him.

His plea was contained in a September 3, 2019 letter to the Comptroller-General by his counsel, C. A. Mishael.

Mishael said “We are solicitor to Mr. Charles Tombra Okah (our client) who is presently under your custody at the Maximum Security Prisons. Borno State. His conviction by Federal High Court Abuja is currently the subject of appeal at the Court of Appeal. Abuja.

“Our client has been living on a single kidney for the past 37 years and this fact, without gainsaying, makes it imperative for constant medical attention which he has not been getting at the Maiduguri Maximum Prisons.

“While he was being held at the Kuje Prisons, he had access to medical experts at the National Hospital Abuja.

“More recently, our client has been experiencing uncontrolled hand tremor and has been passing blood in his urine. He also has developed other ailments that require urgent and expert medical review.

“The Maximum Security Prison in Maiduguri Borno State, where he is presently being held lacks both the expertise and facilities to treat our client of the kidney related ailments and other health challenges he is currently facing.

“We therefore apply that the controller in Maiduguri be directed to grant our client permission to attend a medical facility that has the facility to adequately treat him.

“In the alternative, we apply that our client be transferred back to Abuja or Lagos Prisons from where he can have access to proper medical treatment.

“While we anticipate your usual cooperation, please accept the assurances of our highest consideration.”