The Gombe State Police Command on Tuesday paraded some suspected cyber fraudsters. One of them, 16-year-old Gabriel Michael, said he was influenced by the lifestyle and songs of a Nigerian musician, Naira Marley bared his mind to Punch Newspaper 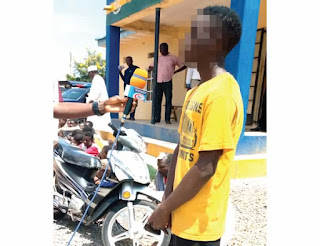 Music has, over ages, proven to be a powerful tool for social crusade and musicians have been known to be among the most effective social thought leaders. If there is an idea that music has failed to propagate, one may safely conclude that such is an idea that will never be propagated. This will explain why companies usually pick musicians as brand ambassadors to promote their products. An endorsement by a musician could translate into an instant boost in sales of products.

Such is the influence that music and musicians wield and which is why musicians are often admonished to be careful about the ideas that they promote. Before now, the theme of love, hard work and good neighbourliness are a common thematic preoccupation in the works of Nigerian musicians. Nowadays, however, illicit sex, fraud, illegitimate, instant wealth and cybercrime have taken the centre stage. As their influence is spreading like wildfire, the musicians are making disciples of many impressionable young people and indoctrinating them into a life of crime and easy virtue.


Such is the case of 16-year-old Gabriel Michael, who was arrested by the Gombe State Police Command for cyber fraud.

Michael, who was paraded on Tuesday by the police, revealed that he took to cybercrime from watching up-and-coming Nigerian musician, Naira Marley, on the screen.

“I learnt hacking through tutorials on YouTube; for so many months I was at it. The lifestyle of a Nigerian musician, Naira Marley, the way he spends money influenced me. Marley talks about being a Yahoo boy (cyber fraudster). My addiction to computer started at the age of seven,” Michael said.

Among Naira Marley’s few known titles, the song, “Am I a Yahoo Boy?” may be the most viral.

The lyrics and the video of the song revolve around cybercrime and a race against law enforcement agents.

Though the police put his age at 18, Michael, in a chat with newsmen, insisted he was 16 years old.

He said, “I’m 16 years old, from Kaltungo Local Government Area of Gombe State. I finished from the Nationwide Academy in Gombe. I was arrested for hacking into someone’s account.”

In his response to how he succeeded in hacking account, he said, “I generate software like IP protocol, Angry IP scans, linos and I use them to do the job.”

Michael, however, begged for mercy, saying “I regret my actions. I pray to be pardoned, so that I can use my talent in other to work for them (law enforcement agency). I can channel my ideas to legal ventures but the challenge has always been that nobody encourages one to use his talent to do good things. For instance, friends will push you to do so because you are making money. My ambition is to work hard to become a member of the Department of Security Services.”

Michael added that his parents did not know about his criminal activities.

“I hide under the cover of my job; I’m into aluminum works. My parents did not suspect my heinous activities,” he said

Michael narrated how he hacked into the bank account of his victim, Deborah Tanko, from whose account he allegedly withdrew N187,000.

He said, “Once you can guess a name or number you will formulate it. Usually, I start from getting your telephone number from your social media platforms, such as Instagram, Facebook and Twitter. After getting your names, telephone number and your bank, I will formulate it, and attempt to get your personal data base from the bank and thereafter generate your token for transaction. I don’t usually exceed two attempts; if you do it thrice, you will be caught.”

Earlier while parading the suspect, the Police Public Relations Officer, SP Mary Malum, said Michael was arrested on August 30, 2019 around the PZ Quarters, a commercial area of Gombe, for fraud, cheating and cybercrime.

Malum said, “Michael used his computer to hack into Tanko’s account and withdrew the sum of N187,100 cash from her GT Bank account and the suspect has confessed to the crime. Exhibits recovered from Michael include one mobile handset, N10,000 cash, two pairs of shoes and clothes, amounting to about N33,000. The items were bought with the proceeds of the illegal withdrawal.

“The suspect is under investigation with a view to charging him to court. In line with the IGP’s vision and mission of the Operation Puff Adder meant to reclaim the public space from heinous criminal elements that are threatening internal security, the Gombe State Police Command is determined to ensure that Gombe State remains peaceful.”

In May, musician Naira Marley, whose real name is Azeez Fashola, was arraigned on 11 counts of cybercrime and credit card fraud by the Economic and Financial Crimes Commission.

The prosecuting counsel for the EFCC, Mr Rotimi Oyedepo, told the court that Naira Marley acted contrary to Section 27 (1)(b) of the Cybercrimes (Prohibition, Prevention, etc) Act 2015.

The young artiste pleaded not guilty and was granted bail in the sum of N2m. Before meeting the bail conditions, he spent weeks in prison.