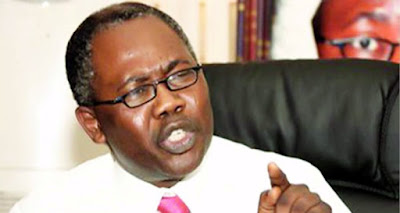 A former Nigerian minister of justice, Mohammed Adoke, has revealed how his former boss, President Goodluck Jonathan, confronted him with allegation that he was sympathetic to then opposition candidate, Muhammadu Buhari.

In a new book on his office years as the minister of justice and attorney general, Mr Adoke listed that accusation among the prices he said he paid for “insisting on rule of law and safeguarding the Nigeria’s constitution”.

The book, Burden of Service: Reminiscences of Nigeria’s Former Attorney-General, was released to the public at the weekend.

Mr Adoke wrote that the former president was poisoned by alleged gossips who wanted to blame him for Mr Jonathan’s loss of the 2015 election.


Mr Jonathan was defeated by Mr Buhari in the historic poll which ushered in a transition from a sitting president to an opposition candidate, the first in Nigeria’s history.

The former minister recounted how Mr Jonathan’s wife, Patience, raised similar accusations against him, following the defeat of her husband.

He said following his advice to the former president to refuse assent to controversial constitutional amendments giving sweeping powers to members of the National Assembly, Mr Jonathan was made to believe he (Mr Adoke) acted to save Mr Buhari who was then awaiting inauguration.

“On 12 May 2015, we held the last National Security Council meeting under the Jonathan Administration. After the meeting, the president asked me to see him in his office,” Mr Adoke wrote.

The reason for the summon, according to the former minister, was Mr Jonathan’s request to know the veracity of Mr Adoke’s alleged loyalty to Mr Buhari.

“There, he confronted me with the accusation that he was told I had prevailed on him to withdraw his assent to the amendments because I was a ‘Buhari boy’.

“I found the allegation ridiculous. I was being accused of disloyalty by the very president to whom I had given my total and unalloyed loyalty,” Mr Adoke wrote. “I was devastated and sad.”

Mr Adoke continued: “I had suffered the indignity of being accused of disloyalty by the First Lady, and now the president was confronting me with another allegation. I felt humiliated.”

The ex-minister said he stood by Mr Jonathan throughout and refused to budge in to promptings to jettison the former president by supporting Mr Buhari.

“For instance, I was approached by one of the principal officers of the current National Assembly to contribute to the Buhari campaign election fund, but I refused to, reiterating I would swim and sink with President Jonathan.”

Mr Adoke said the person who approached him told him that other officials of the Jonathan government were donating for the Buhari campaign.

“To that person, I was on a suicide mission as many cabinet colleagues, including those known to be close to the president, had made donations to the Buhari’s campaign.”

Another instance of prompting to support the Buhari campaign Mr Adoke cited was one from a foreign diplomat in Abuja.

“Similarly, one of the frontline ambassadors in the country had attempted to prevail on me to consider working for President Buhari,@ he said. “But I declined instantly, insisting that I was a frontline member of the outgoing administration, and I was also too close to Jonathan to consider serving under Buhari.”