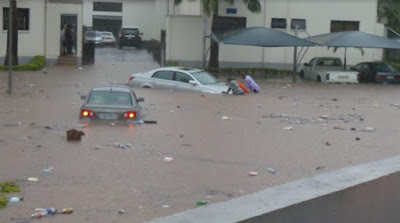 For some staff and individuals, with cases pending at the Court of Appeal, Abuja division, it will take a while to overcome the effect of the negative impact of the rainfall experienced in the city in the past few days.

Unlike the case last year, where minor flooding was witnessed around the court premises, the impact of the flood experienced between Monday and Tuesday this week was massive.

Not only were vehicles submerged, offices were flooded with files and documents impacted.

Most affected was the Abuja division, sitting on the lower end of the sprawling structure, which also houses the Court of Appeal headquarters.


“Some of our files were affected. We intend to work with lawyers in cases affected, for replacement. We have never had it so bad,” a senior official, who prayed not to be named, said.

Another, who sought to be identified with her first name, Juliet, said her car was among the vehicles that were affected.

“We had to escape without our vehicles. We were only able to recover our vehicle the next day, when the flood receded.

“My car is currently with the mechanics. They are battling to fix it. The car was totally submerged in the flood.

“Beside the engine that is said to have been affected, all the documents I had in the car were also affected,” she said.

A lawyer, Isaac Okechukwu said he was in court to ascertain the condition of things upon being informed about the development.

“I heard that the court was flooded and some offices and case files affected. I came to see if my cases were among those affected,” Okechukwu said.