7:12 AM CuteNaija 0 Nigerians in Diaspora 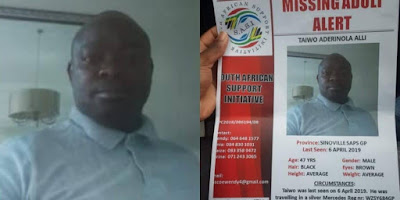 The family of a businessman, Mr Taiwo Alli, is in a state of despair since he went missing on April 6, 2019, in Pretoria, South Africa.

The family, who said all efforts to find him had proved abortive, called on Nigeria’s Minister of Foreign Affairs, the Chief Executive Officer of the Nigerian Diaspora Commission, the Nigerian High Commissioner and Consul General in South Africa and other relevant government and non-governmental agencies to use their good offices to prevail on the South African Government and police authorities to diligently search for and locate Taiwo.

NE gathered that the 47-year-old Taiwo was last seen by his wife, Jeminah, on Saturday, April 6, 2019, when he left his home for the Tshwane District Hospital, Pretoria, to seek medical attention.

It was learnt that he never got to the hospital nor returned home and had not been seen since then.

The spokesperson for the family, Dolapo Alli, said a case of a missing person was reported at the Sinoville Police Station, Pretoria North, on April 9, 2019, by Taiwo’s twin brother, Kehinde, and his wife, Jeminah, adding that the police had not made any significant progress in locating his whereabouts.

“He was last seen by his wife, Jeminah, on the morning of Saturday, April 6, 2019, when he was reported to have left his home for the Tshwane District Hospital, Pretoria, to seek medical attention. He never got to the hospital nor returned home and has not been seen since then.

“Taiwo’s wife, aged parents, siblings and all family members have been in great distress and pain since he went missing. While we continue to trust God for the safety of our dear brother, we daily suffer psychological trauma and torment, wondering what could have happened to him.

“We trusted the South African police authorities, but it is now very clear to us that not much is being done to unravel the mysteries surrounding the whereabouts of our brother. We now count on the diplomatic intervention, network and deployment of necessary resources to locate and reunite Taiwo with his family.”

When the spokesman for the Minister of Foreign Affairs, Ferdinand Nwonye, was contacted, he asked our correspondent to write an official letter to the ministry.

“The spokesperson is not the chief investigator of the ministry. I don’t do the investigative job and I am not a journalist. If you want an enquiry, you write to the ministry officially. The ministry will refer back to the one that has been submitted before, contact the embassy and find out the latest development on the matter. I am not a spirit please,” he said.