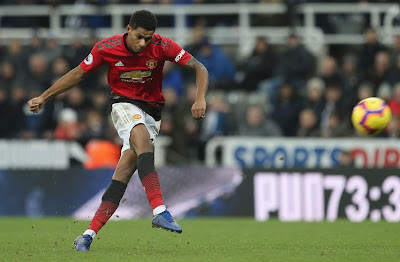 Manchester United returned to winning ways and ended Leicester’s unbeaten start to the season by edging to a Premier League victory in a pulsating contest at Old Trafford.

After thrashing Chelsea 4-0 on the opening day, United had failed to win any of their last three games but took all the points to inflict Leicester’s first defeat of the campaign.

Marcus Rashford scored the only goal from the penalty spot in the eighth minute after being tripped by Leicester defender Caglar Soyuncu.

Rashford could have got another in the second half, but his wonderful free-kick from 30 yards curled over the wall and onto the angle of crossbar and post.


Defender Harry Maguire, given a torrid reception by the Leicester supporters, came close to scoring against his old side but headed straight at Kasper Schmeichel.

The result means United leapfrog their opponents into fourth place, while Leicester drop down to fifth.