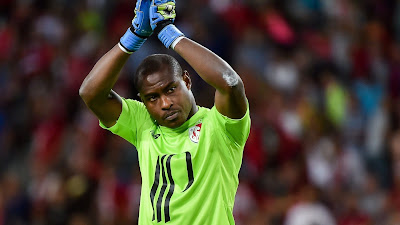 Former Nigeria goalkeeper and captain, Vincent Enyeama, has thrown the door open to a possible return to the Super Eagles.

Enyeama quit international football after making a record 101 appearances for Nigeria in 2015.

The 37-year-old is, however, having a second thought and said in an interview with Brila FM on Friday that should the country call for his services, he would oblige them.

“I cannot say no to Nigeria, that’s the truth,” Enyeama said.

“If Nigeria tells me today ‘Vincent, we have goalkeeping problem; we need you’, I will be there. I can’t say no.


Following his bitter retirement from the national team in 2015 after falling out with former coach Sunday Oliseh, the former Lille goalkeeper also said that no one from the NFF has reached out to ask him to overturn his decision and return to the Eagles.

“Since I left Nigerian football in 2015, no one has contacted me.”

Enyeama has been without a club since August 2018 when his contract with French side Lille was terminated by mutual consent but had a failed trial with another Ligue 1 outfit, Dijon, two months ago.