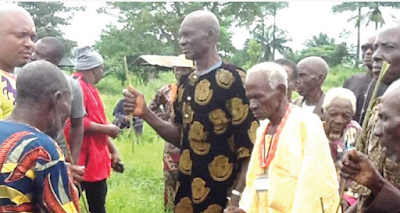 Elders drawn from the 16 communities in the Ohaukwu Local Government Area of Ebonyi State, on Thursday, congregated at the village square (Obodo Amananta) at the Ngbo/Izziah Cultural Centre and called on the gods of the land to deal decisively with anyone involved in cultism, sponsoring war and other social vices in the area.

Southern City News reports that penultimate week, some communities in the Ohaukwu LGA observed the disappearance of four youths and the killing of 10 persons by yet-to-be-identified hoodlums.

Speaking during the ceremony at the cultural centre, the Chairman of the council, Clement Odah, said the announcement was to ensure lasting peace, adding that they were working to make the communities safe.

According to him, the elders of the clans and traditional rulers in the Ohaukwu LGA gathered to make a proclamation against anybody involved in cultism as well as promoting war and any form of bloodshed.


Odah said, “It is to mark the climax of peace and security in the Ohaukwu LGA. A lot of things have been done. We have called several meetings; we have set up a lot of structures; we have campaigned and worked very hard to make sure that Ohaukwu becomes the safest local government area in Ebonyi State.

“By the grace of God, apart from recent developments in the Agila/Ngbo axis, the local government area has become very peaceful. It is almost like a model. But we decided that we must test the sincerity of everybody.

“We called for this traditional and spiritual ceremony. This place is called Obodo Amanata. It is not a place you will come and tell lies. It is a place where every man’s honesty is tested.

Also speaking, the Chairman of the Ohaukwu Traditional Rulers’ Council, John Ogeh, noted that the spiritual exercise became necessary in order to rid the area of evil.

Ogeh, the traditional ruler of the Okposhi Eheku community, stated, “As elders, we have a way of doing things and what we have done here today is to cleanse our land of all forms of social vices. We warned the residents to desist from doing evil and that the communities would gather for this ceremony.”