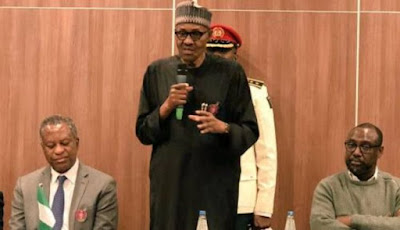 The Minister who stated this his Conference Hall Ministry of Foreign Affairs Abuja said that the Nigerian President will use the opportunity of the UN Assembly to reach out to other Nigerians in the diaspora with a view to attracting investments into the country.

He informed that the number one citizen would be leading a big delegation comprising of members of his cabinet and heads of government agencies to address many issues affecting the nation.

He also hinted that the President is billed to deliver a speech at a high level session in which Heads of States of hundred countries will be in attendance.


On the issues to be addressed at the session, he said that security, sustainable development goals, humanitarian crisis and child right issues would be top in the agenda of the Nigerian delegation.

On the benefits Nigeria would derive from the UN Assembly visit, he said that the Nigerian delegation will use it to push for election of its citizens in the decision making bodies of international organizations as UNESCO,ICAO and International Marime Organization.

He further noted that about 25 billion dollars accruing to Nigeria from Foreign Direct Investment FDI is coming from Nigerian in diaspora and the visit would strengthen the  initiative for the benefit of our country.

He added that the 74th session of the global body would be chaired by Nigeria Permanent Representatives to the United Nations Amb Mohammad Bande who recently was elected the President of the UN Assembly.