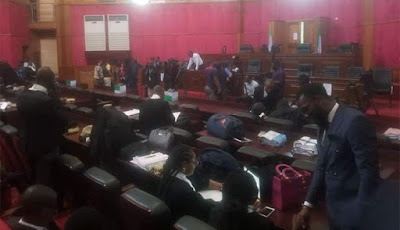 The Presidential Election Petition Tribunal sitting at the Court of Appeal, on Wednesday, dismissed a preliminary objection by the Independent National Electoral Commission, seeking the striking out of the petition filed by the Peoples Democratic Party and its candidate, Atiku Abubakar, challenging the declaration of Muhammadu Buhari of the All Progressives Congress as winner of the February 23, presidential election.

INEC’s motion dated May 15, was filed by its counsel, Yunus Usman SAN.

Specifically, INEC contended that the non-joining of Vice President Yemi Osinbajo as a party in the petition rendered the case incompetent and therefore liable to be dismissed.

But in a lead judgment, Chairman of the 5-man PEPT, Justice Mohammed Garba held that the non-joinder of Osinbajo could not render the petition incompetent.

Justice Garba stated that the VP is only an interested party and not a necessary party because he was chosen by the 2nd respondent, President Buhari and the APC (3rd respondent) as a running mate.

In a unanimous ruling, the tribunal held that “the motion of the 1st respondent is not well-grounded in law, it lacks merit and is hereby refused”.

Also, Atiku won the second round at the Presidential election petition tribunal, as the court ruled that his lead counsel is registered to practice law in Nigeria, that nothing is wrong with his full name or abbreviations.