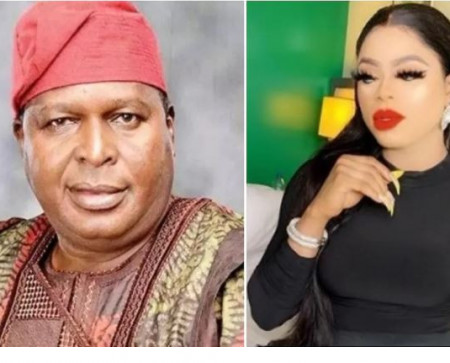 The Director-General of the National Council for Arts and Culture, Otunba Olusegun Runsewe has mocked popular  male cross-dresser, Bobrisky over the shut down of his party by men of the Nigerian police force.


Runsewe, who spoke on Platform, a programme of the Nigerian Television Authority, said the country was on the cusp of becoming a great nation while he described Bobrisky as a national disaster.

Two weeks ago, the NCAC DG had condemned Bobrisky, saying if nothing was done to stop the celebrity immediately, it might be too late when something was eventually done.

But Bobrisky took to his Instagram account five days later to dare Runsewe.
The cross-dresser said, “I heard someone in government talked about me a few days ago. Please, tell him I’m waiting for him. It’s then he will know that I roll with his bosses in government, not someone at his level. So, he left serious issues in Nigeria to address Bobrisky; but I popular sha.”

The police, however, stormed the venue of Bobrisky’s 28th birthday party at The Pearl Gardens, Lekki, Lagos, last Saturday with several arrests reportedly made.

The celebrity lamented on his Instagram page that several millions spent on the party had gone down the drain, including what appeared to be a lavish seven-tier cake.

Runsewe, on Friday, however, boasted that all the expenses made for Bobrisky’s birthday had come to nought.

The interviewer had asked Runsewe to comment on the conceivably funny statement made by “a particular character” on social media after the NCAC boss had reprimanded him “for behaving in a certain manner.”

“We dropped the whole thing and all the food was a waste because he thought he was dealing with the Nigerians of yesterday. A change has come and there must be a new vision for this great country.

“We are going to issue a statement very soon; if we catch anybody on the street disgracing this country — there is law and order in this country. He was only dropping names. He knows nobody. That statement he made is enough to destroy the credibility of our country.”