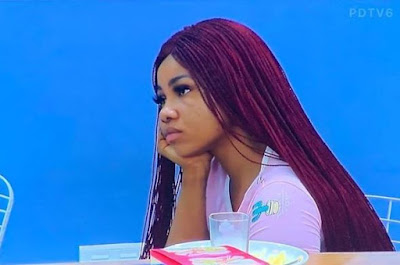 Celebrities have expressed divergent views over the shocking eviction of BBNaija housemate, Tacha.

The controversial housemate was kicked out of the show after she was embroiled in a shouting match with Mercy which turned physical after Tacha grabbed Mercy’s hair and she, in turn, tried to defend herself with an electric iron.

For her part in the altercation, Mercy got two strikes from Big Brother “for not stepping away from a volatile situation.”

Speaking about Tacha’s disqualification, Daddy Freeze said:” Dear Big brother, just in case you missed the clip here it is again, we can clearly see Mercy assaulting @symply_tacha twice once with how she flung her hair in Tacha’s face, the second time when she grabbed the iron in a threatening manner; THAT’S ASSAULT!
Question what is Mercy still doing in the house if Tacha was disqualified?”


“I don’t support violence but I fault her disqualification. The part they had to throw her out is the part that I do not support. Mercy too attempted to hurt her”,Nigerian comic, AY said.

Controversial Gambian born Ghanaian actress, Princess Shyngle wrote:” Forget the fact that @symply_tacha is my favorite housemate but this disqualification is bullshit, she was clearly provoked and she reacted which is very normal, if any girl dare flip her stupid dirty hair on my face I would have slapped the shit out of you”.

Ex BBNaija 2019 housemate, Jackye Madu wrote:”When I said she is a walking time bomb, you all trolled me.Look at it now. She didn’t see the 99th day, she had always wanted “.

On the flip-side, other celebrities like Dayo Adeneye a.k.a D1 commended Biggie for disqualifying Tacha.  The media personality complained over Tacha not being remorseful after her disqualification.

According to him:” Not even an ounce of REMORSE. And she will be someone’s wife and mother some day?”

Nigerian psychiatrist and media personality, Dr Memunah said:” People should never let emotions strip them of their opportunities. In our pursuit for greatness, being emotionally intelligent is key to our success in life”

TV presenter, Shade Ladipo in her reaction said:”The reaction of both housemates shows who deserved to stay. When pride and anger rule you, opportunities move to the next person who has less pride and anger. Talent, Over confidence and even money is never enough”