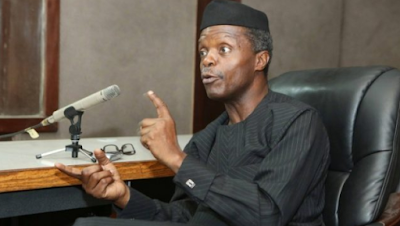 The Movement for the Actualisation of the Sovereign State of Biafra (MASSOB) says the cabal in the presidential villa are frustrating Vice-President Yemi Osinbajo.

Uchenna Madu, MASSOB leader, said this in a statement issued in Awka, Anambra state, on Sunday.

He said the silence of President Muhammadu Buhari to the alleged frustration of Osinbajo by the cabal in the presidential villa is an embarrassment to Christians in high positions.

Buhari had disbanded the economic management team headed by the vice-president and constituted an economic advisory council in its stead.

TheCable  reported that Buhari directed Osinbajo to, henceforth, seek presidential approvals for agencies under his supervision — a claim the presidency denied.

Madu said Osinbajo is experiencing a payback from the cabal, adding that the vice-president will soon be “disgraced out of office”.

“MASSOB recalls that on Monday, September 16, 2019, Prof Yemi Osibanjo was removed unceremoniously as Head of the Statutory National Economic Council. On Tuesday, September 17, agencies and ministerial departments under his watch were redirected to report directly to Mr President,” he said.

“Same day, virtually all his aides attached to the Office of the Vice President were given marching orders to leave Aso Rock.

“On Wednesday, September 18, a report from the House of Representatives indicted him for illegally approving funds for national emergency relief operations after his media assistant in a press statement dismissed insinuations that the Vice President was found wanting in his approvals of funds and contracts. These sponsored allegation warranted the directive from the office of Mr. President that those parastatals should report directly to Mr. President.

“MASSOB views all these subjective frustration as a payback time to Prof. Yemi Osinbajo by an unrepentant and unforgiving cabal that has vowed to fulfill the commandments of their forefather, Othman Dan Fodio.

“MASSOB wish to remind the southern regions of Nigeria that the perceived sins of Vice President Osinbajo is that he presided over the Special Presidential Panel that indicted cabal member and former Secretary to the Government of the Federation, Mr. Babachir Lawal, for the grass-cutting contract scandal leading to his sack from office and replacement by his cousin, Mr. Boss Mustapha.

“Recall also that the vice president fired another cabal member and former boss of the Directorate for State Security, Alhaji Lawal Daura, from office while Mr. President was away on medical tourism abroad.”

“Prof. Yemi Osinbajo will soon go the way of Honourable Justice Walter Onnoghen, Mrs. Oyo Ita, Barrister Obono Obla and Madam Kemi Adeosun. He will be disgraced out of office because he sold and allowed himself to be used against his Yoruba people and Christians in general. He was blinded by the greed and wickedness of his master, Bola Tinubu, who will later be the worst hit.”