Army dismisses 3 soldiers for kidnapping, ties them with rope 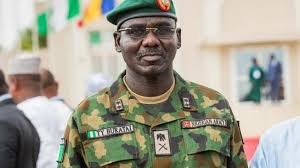 The Nigerian Army on Sunday says it has dismissed three soldiers arrested among a kidnapping gang in the outskirts of Maiduguri.

Maj.-Gen. Olusegun Adeniyi, the Theater Commander, Operation Lafiya Dole, disclosed this while handing over the dismissed soldiers to the police in Maiduguri.

Adeniyi disclosed that the soldiers were arrested with 22 other suspects by a joint patrol team in the early hours of Sunday at a building in the outskirts of Maiduguri.

He said that the soldiers were initially deployed to the Operation Lafiya Dole, but engaged in nefarious activities such as kidnapping, armed robbery, killings and cultism.

Adeniyi added that the erring soldiers were dismissed in accordance with the military procedures, warning that the army would not condone criminals in its fold.

“The three soldiers were caught among the evil group, there was further resistance and attempt to escape, so we tied them up with ropes because handcuffs were not available.

“In addition; we could not put violent men that do these kinds of crimes into a police van to take to the station, there will be a breakout on the road and we know what would happen.

“We have to restrain them thoroughly with ropes before we take them and handover to the police.

“The Acting GOC, 7 Division, Brig.-Gen. AK Ibrahim, has conducted military procedures. We do not keep armed robbers, kidnappers and cultists in the army, they had been dismissed.

“We gathered here to witness their handover to the Nigeria Police Force (NPF) for civic action, they are dismissed, and they are no longer soldiers of the Nigerian Army.

“Our code of conduct is strict and high, no evil soldier will be allowed to serve in the army,” Adeniyi said.

The commander called on the people to be vigilante and report suspicious persons, movement and activities to security agencies

Meanwhile, the Borno Commissioner of Police, Mr Mohhamed Aliyu, said the command had arrested 25 suspects at Bagani Hotel in Abuja Sheraton Area of the metropolis.

Aliyu said the suspects belong to a cult group called Neo Black Movement (NBM), adding that they were arrested wearing black dresses at about 2:00 a.m. while conducting their imitation activities.

He disclosed that preliminary investigations indicated that most of the suspects were students of the University of Maiduguri (UNIMAID), Ramat Polytechnic, Maiduguri, a medical doctor, a banker and three dismissed soldiers.

Aliyu added that one of the suspects fired shot in the air and run when the patrol team stormed the hideout.

He said the suspects had been terrorizing residents of Maiduguri and its environs and were involved in robbing filling stations.

The commissioner revealed that the command had recovered calabashes, a 25-liter keg containing reasonable quantity of red substance suspected to be human blood and charms.