Amaechi vs Abe: APC crisis in Rivers gets messier 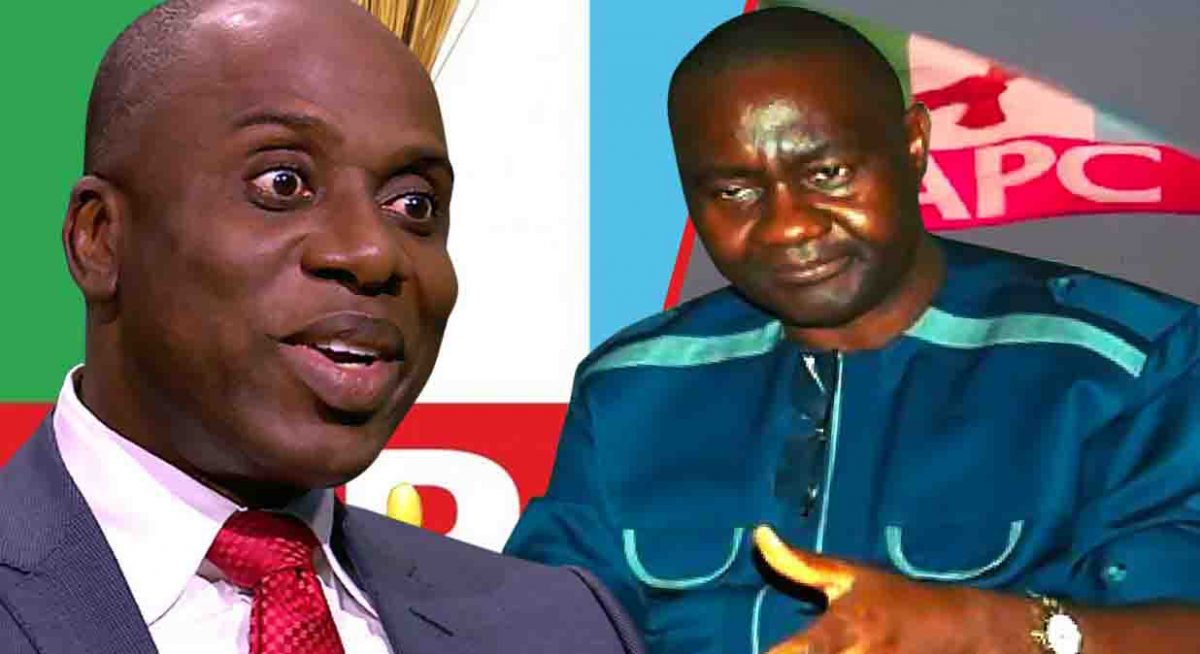 Some aggrieved members of the All Progressives Congress in Rivers State led by Senator Magnus Abe have dared the National Working Committee of the APC over plans to hold congresses in the state.

This is because aggrieved members of the APC said they have rejected the constitution of the five-man Caretaker Committee Members set up to manage the affairs of the party and conduct ward, Local Government and State Congresses in the state.

They came up with this after the Isaac Abott Ogbogbula-led committee assumed office after their swearing-in by the National Chairman of APC, Adams Oshiomole in Abuja.

Earlier, Chairman of the CTC, Ogbogbula while briefing newsmen at the party secretariat at Garrison axis of Aba road, assured of free, fair and transparent congresses.

Ogbogbula while disclosing that their mandate is to run the affairs of the party pending the conclusion of the congresses, encouraged APC members in the state to give all necessary support to the committee and allow peace to enable them take the party to the next level.

But, at separate gathering in Port Harcourt, the aggrieved APC members threatened to boycott the scheduled congresses just as they criticized and accused the national leadership of the party of being bias and working to destroy the party in the state.

In a 9-point communique read by former state Attorney General of the state, Wogu Boms said, “as critical stakeholders of the Rivers State chapter of the All Progressives Congress (APC) who toiled and sweated under very difficult and dangerous circumstances to build the party in Rivers State, we are appalled and dismayed by the current situation of the party in the State.

“That Nigerians are aware that the crisis in Rivers APC was set off by the manner in which last congresses were deliberately mismanaged in 2018, resulting in catastrophic and unprecedented consequences for the party.

“That various efforts by different leaders of the party across the nation to find a solution to the challenges of Rivers APC before the 2019 elections were all rebuffed by the Minister of Transportation, Rt. Hon. Chibuike Rotimi Amaechi, meaning that all well intended efforts came to nothing.

“We note with concern that the party is yet again threading the same route of exclusion and disdain for the rights and feelings of party members that plunged the Rivers chapter of the APC into needless crisis resulting in the party being denied participation in the last general elections in Rivers State.

“That as critical stakeholders, and bearing in mind the circumstances of Rivers APC, we were not consulted by the National Working Committee (NWC) of the party in its decision to appoint a caretaker committee in Rivers State nor does the Committee reflect the diversity of the party in the state. The so called caretaker committee members are simply cronies of the Minister of Transportation, their objective and purpose is clear, they were parties and participants in the actions that brought the party to its knees in Rivers State. Apart from being unknown to the constitution, by all rules of justice and fairness they cannot provide a solution to our present challenges.

“We, therefore, reject the caretaker committee as it is clearly an orchestration to deepen the woes of the party, and we urge all members of the APC in Rivers State to remain steadfast in the pursuit of justice.

“Based on extant judicial pronouncements, and the report of the Governor Lalong Committee as adopted by the National Executive Committee (NEC) of our great party which stated clearly that where congress could not hold, the existing executives were to manage the affairs of the party; Chief Peter Odike by the rules of the Party should have been consulted as Chairman of the APC in Rivers State.”

On his part, Senator Magnus Abe insisted that he would continue to support the fight against injustice and wrong doings in the Party.

“I want to thank each and everyone of you for the spirit you have exhibited. A party that has this kind of committed and dedicated cannot die. Nobody can kill it,” he said.

Meanwhile, the Peter Odike being referenced by the aggrieved members has called on Senator Magnus Abe and others to sheath their swords, toe the path of reconciliation and work towards a United APC.

Odike who led the Abe’s faction of APC in the famous Ibrahim Umar case in a statement circulated in the media said the constitution of a Caretaker Committee to spare head the Affairs of the party means there is an end in sight for the crisis rocking the APC.

According to him, “I, Prince Peter Odike, one of the Founding Father’s of APC in Rivers State, and the Acting Chairman of the Party in the State hereby congratulate the National Working Committee of our great Party on the decision to settle the crisis of the Party in our State once and for all.

“Let me also congratulate the Caretaker Committee as headed by Barr Isaac Abot Ogbogbula on their appointment.

“I wish therefore advise the Committee that the task before them demands that they be fair, democratic and firm in the discharge of their duty. The public may be reminded that our position has always been to open the democratic space for all eligible to participate in. Posterity will hold the committee responsible if they fail to do so.

“May I, therefore, urge all APC members to embrace this opportunity that has been provided in order for us to be the formidable Party that we all yearn for.

“In the coming days, I will once more, be meeting with the leader of the Party, Rt. Hon. Chibuike Rotimi Amaechi, as well as other leaders and stakeholders of our Party to ensure that we do not miss this golden opportunity to be the great force that we are.”

It will interest you to know that the crisis in the Rivers state chapter of the APC led to the inability of the party to Present candidates to contest the general elections in the state at all levels.