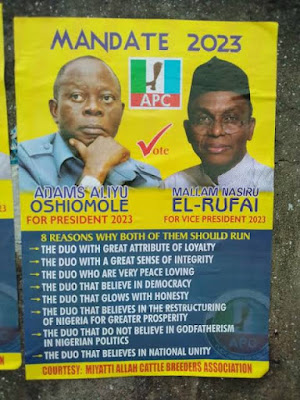 The National Publicity Secretary of APC, Malam Lanre Issa-Onilu, who said this at a news conference in Abuja on Thursday, said that the party is not concerned about the race for 2023 elections now.

The focus of the party, he said, is governance.

The posters of APC National leader, Asiwaju Bola Ahmed Tinubu, Gov. Nasir el-Rufai of Kaduna State and the APC National Chairman, Adams Oshiomhole, had been seen in some parts of the country.

Issa-Onilu, who said that the governing party was faced with challenges of governance, security, economy and corruption, said that it would focus on policies, projects and programmes that were imperative to Nigerians.


“As a party, we want to state clearly that having won elections convincingly and having been given the mandate to run government for the next four years, our major and only focus now is governance.

“We are not engaging in any other activity about 2023 elections.

“Wherever you see such (posters) you can be sure it is from mischief makers to continue to take actions to cause distractions for the governing party.

“We are to deal with the challenges of governance, security, economy and corruption as well as other associated issues. That is what we are focused on.

“So, as a party, we understand that the social contract we have signed with the people of Nigeria with the renewal of our mandate,”

Issa-Onilu also urged the Coalition of United Political Parties (CUPP) not to undermine the order and security, particularly the judiciary as an important institution of the country.