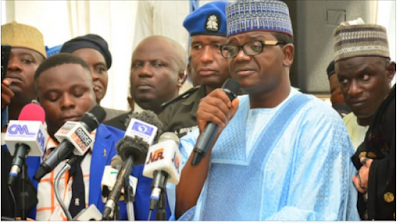 Bello Matawalle, governor of Zamfara, says the establishment of Ruga settlement in states across Nigeria will put an end to banditry among herders in the country.

Mutawalle, who spoke in an interview with Osasu Igbinedion on The Osasu Show, said if social amenities are provided for the herdsmen, they will remain at one place and “they don’t have to go round Nigeria to cause havoc”.

He said his government will grant amnesty to armed herders if they are willing to surrender their arm and release those they are holding.

The governor blamed the upsurge in banditry on the alleged attacks by vigilante groups on herdsmen.

“Zamfara is a home of everybody, both Fulani and Hausa. This Fulani comes to the town to do their shopping and go back to the forest but whenever vigilante group see any Fulani man, they will slaughter him. And Fulani doesn’t forget and forgive, if you kill one of their persons, they will come for a reprisal,” Mutawalle said.

“Those that are holding sticks before, that is the Fulani man, now you see him holding AK47, AK49 and he uses it to do his own business; kidnapping people to get ransom, killing people to take their cows and property.

“When the crisis started, the vigilante groups have been killing the Fulanis, killing their cows, burning their huts. So, most of them now are homeless, they have no cow, they have nothing. All they have is that gun. But we want to collect it from them to integrate them to the society. We’ll do some development project for them, give them education.

“So, when we stopped vigilante groups from killing Fulani, we called all of them together, we heard from both sides and we now sort out the best way in order to stop the banditry activities. And now, the Fulani has started releasing those under captivity.”

Asked what his government plans to do for the farmers and vigilante groups affected by the crisis, Mutawalle said: “We are trying to do Ruga, I have already ordered for that…so that we can maintain them in one place, they will not go round with their cows, because as far as they have their social amenities in one area, they’ll remain there. So, they don’t have to go round Nigeria to cause havoc.

“By the time each and every state can do this, particularly in northern Nigeria, I assure you our Fulani will never travel to any other state., they’ll remain where they are.”

The governor had earlier announced that the state had already earmarked 100 hectares of land for the establishment of Ruga settlements, a federal government initiative proposed to resolve the clashes between farmers and herdsmen.