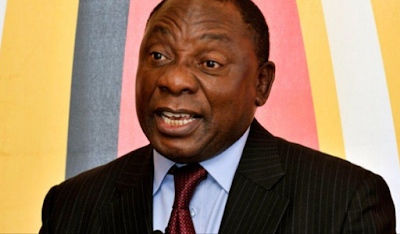 Superville, who is currently in France covering President Donald Trump’s activities at the ongoing G7 summit, tweeted a picture with the caption, “ World leader bear hug before the group photo @ #G7Summit in Biarritz, France. ⁦@EmmanuelMacron @narendramodi @JustinTrudeau and one unidentified leader.”

The tweet which didn’t go down well with South Africans currently has 2400 replies as the time of failing this report.

Many have been asking her to take it down but rather than do so, Superville tweeted with a caption of the South African leader, hours later.

Superville has worked at the White House for more than eight years. She was among members of a five-person team assigned to cover the presidency of Barack Obama.

This is where all of you Africans Americans comes from

This is very embarrassing. A 30 second Google search would have revealed that he is Cyril Ramaphosa, the president of South Africa.
— Alastair McAlpine (@AlastairMcA30) August 26, 2019

Darlene, darling, that's our whole honourable president, Cyril Ramaphosa. We love him, you have p*ssed of an entire country.
— Gillian Faichnie (@GillianF) August 26, 2019

...you should be fired for GROSS incompetence...
— Ahmednasir Abdullahi SC (@ahmednasirlaw) August 26, 2019

That's @CyrilRamaphosa
🇿🇦He sold nuclear technology to Iran
🇿🇦All SO responsible for #FarmMurders
🇿🇦his goverment is All SO discriminating aganst minority
equivalent to the apartheid gov
🇿🇦25 years of serving #SouthAfrica has made him one of the richesthttps://t.co/MMM3IXAvAH
— 🇳🇱🇳🇱🇳🇱🇳🇱🇳🇱🇳🇱🇳🇱🇳🇱🇳🇱🇳🇱🇳🇱🇳🇱 (@Greg7Reob) August 26, 2019

That “unidentified Leader” is our greatest and smart President @CyrilRamaphosa and trust us when we say, the best leader among those three. Just learn a thing or two about Africa and stop being @realDonaldTrump sucker.
— #KyDropsVulaOnFriday (@SibusisoMtungwa) August 26, 2019

No guys this reporter is disrespecting our president. We might differ with President Cyril Ramaphosa on our domestic affairs but outside of our borders he is our president and must be respected.
— Marxists (@Kgomo389) August 26, 2019

Dear Unknown Journalist the one identified Leader is an astute business man who is well eloquent and visionary-of note. Not in a million years could you ever amount to his level of intellect.
— Lungisile Fikizolo (@FIKIZOLOL) August 26, 2019

What kind of journalism is this that lacks the professional curiosity to find out who a world leader is? Some have called it many names, I call it INCOMPETENCE laced with professional laziness! For the benefit of your followers, it is @CyrilRamaphosa the president of South Africa
— Hopewell Chin'ono (@daddyhope) August 26, 2019

you're exceptionally lazy and this is embarrassing for you especially in the age where you can even do a search with images. do better
— Mimi🧕🏾 (@msaaminahsblog) August 26, 2019

And that one unidentified leader happens to be BLACK. You clearly had no interest in identifying him. Trashy behavior
— Black & Blessed ❤❤✌ (@Mama_Bridgie) August 26, 2019

The "unidentified leader" is President @CyrilRamaphosa - the president of the mighty Republic of South Africa!