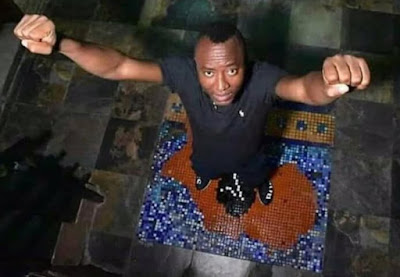 Deji Adeyanju, an associate of the publisher of the online medium, Sahara Reporters, Omoyele Sowore, says members of the ‘Take it Back’ movement visited the incarcerated activist on Monday.

The post was accompanied by an aerial shot of Sowore giving a revolutionary salute. A Google search revealed that the photograph first surfaced online on February 12, 2019.

Omoyele, the presidential candidate of the African Action Congress in the February election, was arrested in the early hours of Saturday and taken to Abuja by operatives of the Department of State Services.

The DSS has since confirmed his arrest and detention.


Sowore had expressed the intention to spearhead nationwide protests against the Federal Government, tagged ‘#RevolutionNow Days of Rage,’ scheduled for Monday, August 5, 2019.

The protests held in some states of the federation, during which security agents clashed with protesters, arresting and tear-gassing some.

Some journalists were also arrested and detained in the course of covering the protests.

Taking to his Facebook wall, Adeyanju had posted, “‪UNBOWED AND UNBROKEN: Take it Back Members visit defiant Sowore in DSS Detention.” ‬

He said the group visited Sowore on Monday evening and was allowed to see him at 6pm.

He had written, “At 6pm today, 5th August, 2019, members of the Take it Back Movement were allowed to visit Sowore, for the first time since his armed abduction He’s in high spirit & unmoved.”‬