We refused polio immunisation to get govt attention — Kano community 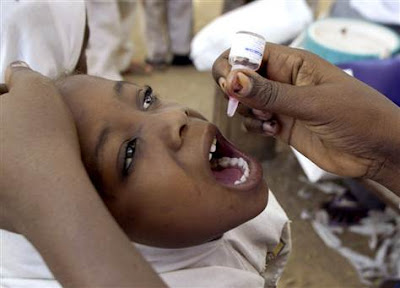 Members of Makuntiri community in Bunkure Local Government Area of Kano State, on Friday gave reasons for chasing away health workers drafted to conduct polio immunisation in the community.

The angry community members who spoke to the News Agency of Nigeria said that they took the action to draw government attention to their plight.


According to them, the road leading to the community is in terrible condition, while the bridge linking them to other areas had collapsed.

Malam Ahmad Ubale, a resident, said they had done all that was necessary to notify government about the state of the road leading to the community, to no avail.

“To show you that we have been left out, people hardly come to visit our community until polio periods; so this time we have to chase the workers away.

“We did that because government has given priority to immunization more than anything else, so our rejecting it is to draw government attention to our condition,” Ubale said.

Another resident, Malam Mudi Bala, expressed concern over the collapse of economic activities in the community as people hardly visit to transact businesses because of the collapsed bridge.

“You have seen it yourself, the community isn’t easily accessible especially with vehicles. Whenever we go out of the community, it’s always difficult coming back.

“Our people suffer from other ailments and we are expected to take them to the hospitals which are far from here. How do we cope with the situation?” he asked.

Bala, however, appealed to the government for prompt intervention to improve their living condition, saying they were not asking for too much.

NAN reports that the Permanent Secretary, state Ministry of Health, Usman Bala, later led the immunization team back to the community and got the children immunized.

He noted the grievances of the community, but warned the residents to desist, henceforth, from injecting politics into health issues.

NAN reports that Bunkure Local Government had targeted about 62,000 children below the age of five for immunisation in the just concluded August Immunization Plus Days.