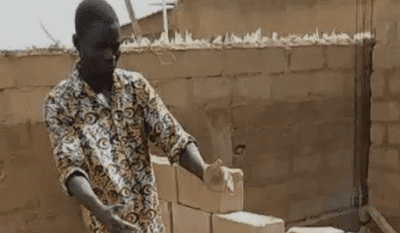 A video of a bricklayer mounting bricks without having to lift them has emerged online. While the exact location of the site is yet to be identified, the bricklayer is said to have been working on a building in Ibadan.

In the video, he can be seen positioning his hand to receive the bricks as they pop up from the ground, after which he lays them on other bricks close to his position.

As the unidentified man carried out the act, an audio of a man speaking in Hausa to express his amusement continued to play in the background.

Although factors such as video editing and reverse play could have contributed to the way the video appears, its emergence has erupted a debate online, forcing many to provide possible interpretations.

See the video below.