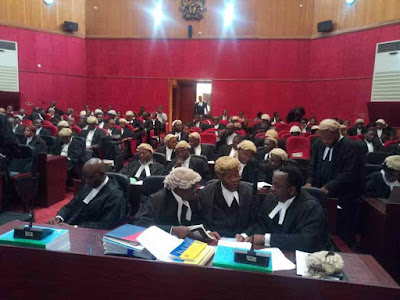 The National and State House of Assembly Election Petitions Tribunal sitting in Benin City Friday listened to a tape of an alleged confession by an adhoc staff of the Independent National Electoral Commission (INEC) purportedly detailing how the 2019 general elections were rigged in the state.

Agbonayinma is challenging the election of Hon Jude Ise-Idehen as House of Representatives lawmaker for Ikpoba-Okha/Egor Federal Constituency.

Ikhuoria was heard in a telephone conversation telling Agbonayinma who disguised as a ‘Ward Six’ Chairman of the Peoples Democratic Party, PDP, that he has delivered on his part.

The INEC adhoc staff said it was his effort that made the PDP win the election adding that the PDP lost in Ward five.

The tape was played when Hon Agbonayinma was testifying in continuation of trial on his petition before the tribunal.

During cross-examination, Agbonayinma said he informed the Directorate of State Security after he discussed with Ikhuoria on telephone and they set up a sting operation.

Agbonayinma said the DSS gave him marked N100,000 to give to Suleiman.

He claimed 10 INEC staff were involved in awarding of votes, adding that some were arrested and later charged to court.

His words, “The phone call was a miracle of my time. I do not know how he got my number.

“After the recording, I reported to the DSS. They gave me marked money to give to him. Suleiman said I should tell my leader to come and settle because he has delivered the PDP.

“Results were awarded to the PDP by INEC. That was why over 38,000 votes were voided in Edo”.

Other witnesses that testified said results were not announced at the polling units but taken to the Ward collation centre.

Aigbogun Emmanuel, a witness, said he signed altered results when he served as an agent of the All Progressives Congress, APC, for him to have evidence to show his party.

He said collation of results started at Adolor College and ended at Eghosa Grammar School.

Promise Igbinevbo, another witness, said there was no collation of results and the votes were not counted in Unit 5 Ward 8.

Chairman of the tribunal, Justice O. Ogundana adjourned sitting to August 19 for the respondents to open their defence.