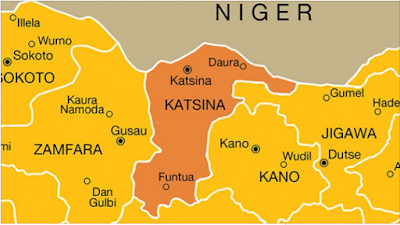 Three women were injured in the fierce counter which took place on Sunday night, according to the state police command.

The suspects were said to have arrived the scene in their large numbers before blocking the road in the late night attack.

Anaz Gezawa, the state police command, said this resulted to a gun battle between them and the security operatives including military and police personnel.

“In the process, the hoodlums burnt down three military and one civil defense operational vehicles,” he said in a statement on Monday.

“Other vehicles conveying members of Shimfida villagers from market are also affected.”

He said three women passing the road at the time sustained gunshot injuries and are now being treated at General Hospital, Katsina.

“The area is still cordoned by our security agencies, to avert any form of eventualities,” the police spokesman added.