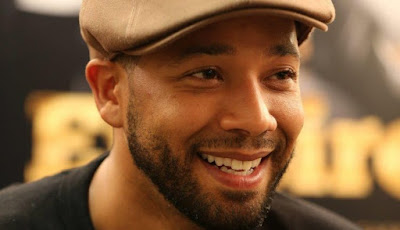 “We as much as anything in case like this, you try to get all the information and make a good decision” Collier explained.

“There’s no plans for Jussie to return to Empire … typically it’s about gathering right info and making sure we’re making the right decisions.”

Smollett, who has played musician Jamal Lyon since the beginning, was indicted in March with 16 counts of disorderly conduct for allegedly filing a false report claiming two men attacked him in an alleged homophobic and racist hate crime in Chicago.


Smollett pleaded not guilty to allegations that he lied to police, and all charges against him were suddenly dropped at the end of March. He has always denied any wrongdoing.

In June, Lee Daniels creator of Empire said that Smollett would not return for Empire’s final season, revealing the scandal played into the decision to end the show after season 6.
Daniels also said he was “beyond embarrassed” for initially supporting the actor’s claims that he was a victim of the alleged hate crime.

“If it turned out that [Smollett] did it, was guilty, and all of it’s accurate, then it will feel like a betrayal,” Daniels said.

After the case shifted against Smollett, his Empire stars were left not knowing what to believe. In April, Daniels told Extra that, “the cast is upset. It is a sad time and we are slowly healing.”

However, Daniels did note that he would continue to support Smollett, and that “the lesson is still to be learned” from the incident.

“What I am learning right now is that I can’t judge. That judgement is for that man wearing that black coat with a gavel and God. I can only support him because he is like my son, he is my son, so I am with him,” he said.

Although the Fox drama is nearing its final curtain call, Daniels told Vulture that he was leaving the door open to possibly continue Empire in the future.