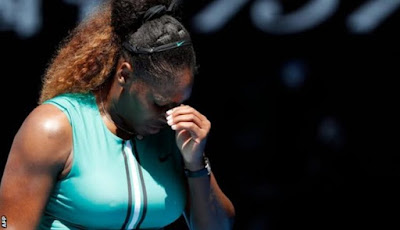 Serena Williams was forced to retire with a back injury on Sunday as the American superstar quit while trailing Canadian teenager Bianca Andreescu 3-1 in the Rogers Cup final.

Williams, who seemed fine on court, suddenly sat crying in her chair before retiring 19 minutes into the match with back spasms.

“It’s been a tough year but we’ll keep going.”


According to Williams, the spasms began during her three-set semi-final win over Czech Marie Bouzkova on Saturday.

“I was just trying to figure out how do you play a match where you have no rotation?” said Williams.

“And I don’t want to get this far and not at least try. I think I would have really regretted not at least going out there and seeing maybe if a miracle happened.”

Also, Williams, who is due to compete in Cincinnati next week, said she has experienced back spasms a lot in her career.

“In that first phase, it is incredibly painful, to a point where I usually don’t get out of bed. So, if it’s what typically happens, I will be fine, but I have to wait and see.”