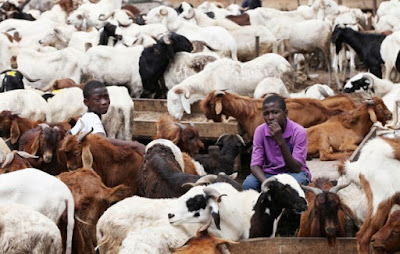 We took a ride round the federal capital territory and neighbouring Nassarawa State to find out the current state of the Sallah preparations.

At the Kubwa expressway rams littered by, so many rams but few Nigerians were seen haggling with the sellers.

The buyers complained of the high costs of the rams said to have been transported from various parts of the country.


The situation is however mixed at the Kubou ram market at the Nyanya area of the FCT, while some sellers claimed to have made huge sales, some buyers complained of high cost.

According to Hamza Abdullkarim a staff of the Federal Ministry of Justice, he is at the ram market to buy for his boss, he claimed he can’t afford the current price.

He also attested to the fact that there is low patronage at the ram market.

This claim was however dismissed by the chairman of the kubou ram market Lawal Abdulhamid, he said the ram market at kubou is experiencing a huge turn out compared to last year.

“People come from as far as Keffi to buy our rams” Abdulhamid said in hausa.

At Maraba, the border town between Abuja and Nassarawa State the situation is similar to that of Kubwa.

Sadick Ibrahim claimed he had not made significant sales since 5 days he brought his rams all the way from Katsina state.

He said he helped his father bring the rams to Maraba to help him rest considering his deteriorating health status.

Ram slaughtering is normal rite for Muslim faithfuls to celebrate the annual fiesta.