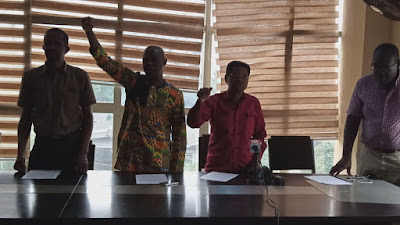 Strong voices from the activist community and newsmen gathered at a press briefing organised by the Coalition for Revolution (CORE) on August 9th 2019 to intimate the public on the next line of action that will follow the nationwide mass protest of August 5th, 2019 tagged  ‘REVOLUTION NOW’.

In the press statement obtained by the newsmen, CORE condemns the arrest of Omoyele Sowore, the convener of #RevolutionNow protest, who was arrested in the early hours of Saturday, August 3, 2019.

“You are all aware of the horrid event that depicts our return to days of state hostility, with the abduction of one of our members, Comrade Omoyele Sowore by the State Security Service in the early hours of Saturday, August 3, 2019 by masked armed men of the DSS-an act that is not only condemnable, but gives room to evil perpetrators to further undermine the safety of innocent Nigerians , as they could also leverage on such in kidnapping people in their homes at dead hours of the night.

“The development at the moment, with the court order obtained on August 8th 2019 by the DSS to retain Omoyele Sowore in their custody without trial for 45 more days which is being described as being renewable,  reminds one of nothing but the military days of tyranny”, the statement read in parts.


Reacting to the statement made by Mohammed Adamu, the Inspector-General of Police (IGP), that the ‘Revolution Now’ protest is an act of terrorism, Olaseni Ajai, Co-convener of CORE said:” Our struggle is for change. That is why we documented everything that we are about. If anybody wants to blackmail us, we have no apologies for our stance. This movement is for changing this country from the current decadence that it is in. We are not going to do anything outside that reality”.

“We shall continue with our days of rage with a mass protest on Monday, August 19th, 2019. On this note we are calling on the people to rise up in defense of genuine democracy. Students, market women, artisans and unions represent the true and popular democracy that can bring to birth a better society. We will win the new Nigeria of our dream only by taking action. We thus call on all exploited and oppressed Nigerians constituting the immense majority of the population to peacefully occupy the streets”

Barrister Affiong L Affiong one of the members of the CORE said: ”In a way you begin to think, do we deserve this? We have been under this kind of tyrannical situation before and now we have found ourselves under the same tyrannical situation . We have Decree 2 in those days that attempted to muscle us, we fought against the military rule as student union activists. This country belongs to all of us, we cannot continue in this tyranny of silence.We have a military regime that is dressed in civilian clothes. They are using legal technicalities to attempt to muscle the movement”.

Another activist, Comrade Lanre Legacy Adeleke called for the release of Omoyele Sowore, adding that Nigeria will not sit down and watch a government clamp down on the freedom of expression of Nigerians.

“We call for the release of Omoyele Sowore and other activists as well.No meaningful Nigerian will sit down and watch a government clamp down on the freedom of expression of an average Nigerian. The 30,000 minimum wage is not even enough.In Nigeria of today, If you are sick and go the hospital, you are a dead person”, Comrade Lanre Legacy Adeleke averred.

The civil rights group also made five core demands which includes an economy that works for the masses, an effective and democratic end to insecurity, an end to systemic corruption and for total system change, the immediate implementation for the 30,000 minimum wage, free and qualitative education for all.